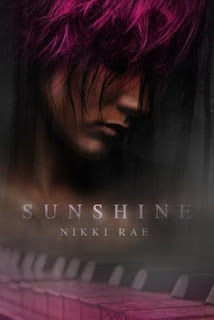 Release date: 28th January 2013
Series: Sunshine Series #1
I got it from: ARC from author via GR New Adult Book Club

Goodreads summary:
18 year old Sophie Jean is pretty good at acting normal. Sure, she’s not exactly happy, but happiness is nothing compared to being like everyone else. She can pretend she’s not allergic to the sun. She can hide what her ex-boyfriend did to her. She can cover up the scars she’s made for herself. Ignore anything. Forget anything. Then Myles enters her life, and he has more than a few secrets of his own. When accident after accident keeps happening to Sophie, she can’t help noticing that he’s everywhere. That he knows too much. That she’s remembering too much.

It’s one thing covering up her own dark past, but does she really need to worry about people finding out just how much Myles likes her? Or that despite how much she doesn’t want to repeat past mistakes, she kind of likes him back? Not to mention the fact that she now has to conceal that Myles drinks blood-that he says he’s about four hundred years old.

She almost forgot about that part.

But Sophie has no plans to ruin the normal life she has created for herself. She can deal with this little glitch, no problem. Even if word has gotten around to the wrong vampire about Sophie and Myles, even if she’s putting the few people she loves at risk. Suddenly, those who were monsters before are just people, and the monsters? They’re real. Now being a normal human being is the least of her problems. Now she has to stay alive.

My review:
Alright, so I have to make the Twilight comparison, so let's get that over and done with. There are many parallels. In some ways, Sunshine reads like the author liked some parts of twilight but not others, so she decided to write her own version. Which is as good a reason to write a book as any. Of course, it could be that she's never read Twilight, and this is just a collection of coincidences. It happens. But whatever the how, why and wherefore, the connection is there. The chaste relationship between Sophie and Myles, some of the events that happen in the book, and Myles himself - there are definitely echoes of Edward Cullen there. Maybe it's just because he's an old-fashioned boy like Edward, but I found their characters rather similar. Also, I wasn't totally convinced by Rae's excuse for Miles being out during the day - 'some vampires have evolved but not others' is on a par with sparkling I'm afraid.

However. Now that I've done all the comparisons, I can get on with telling you why, despite them, I really enjoyed reading Sunshine! Firstly, Sophie is a really interesting character, with a great voice. She totally drew me in right from the start. The issues she has would make a lesser person into a hermit, but she has an inner strength that is admirable, if sometimes hidden from herself. She doesn't see her health problems as real problems, just inconveniences, which is a great way to be. Then there's her emotional problems, which are more severe. Emotionally, Sophie is very delicate. We see her go through some trauma, and we see the consequences of that, but as she gets closer to Myles, millimeter by millimeter, we see her start to heal. Sometimes a character like this can come across as just that - a character in a book. But Sophie has a certain realism about her. I like her a lot more than Bella Swan!

The way Myles reacts to finding out about Sophie's problems is perfect. He may be a gentleman, but he's also quite a stoic. He doesn't treat her with pity or kid gloves, but he does give her the space she needs in an understanding way. It takes a long time for their relationship to get off the ground, and you'll understand way if you read the book, but this is another plus for it in my eyes. No insta-love, no obsession, just a girl who's very wary of boys allowing this unusual guy to gradually become friends and little by little, something more.

Sunshine is an interesting mix of genres - at first it's easy to forget that it's a paranormal book, because Sophie's very human issues take precedence. Rae deals with a number of serious issues well here. When the paranormal aspect is introduced, it's done in such a way that it's kind of believable (if you can believe in vampires). Sophie's reaction to being told what Myles is was suitably realistic. When it gets closer to the end and the big bad sets the pace off running, things get very paranormal for a while, which is something of a shock after such a gentle introduction, but it kind of works.

All good characters need a good supporting cast, and Sophie is no different. Her friends Boo and Trei, her brother and his boyfriend, even her family are all well-developed, essential and complete characters. Her brother Jude in particular is a great guy. I want him to be my brother. I would have liked to have seen a bit more of Myles friends in the book - it felt like they were significant when we first met them, but then we didn't see that much more of them which disappointed me slightly. Perhaps we will in the future.

Sunshine is touted as the first book in a series, but there's no cliff-hanger ending, which is nice. It is what it is, a story about a girl who's allergic to the sun and a vampire who isn't. There's a pleasant synchronicity and irony there. There are a few things left open - just enough to make me want to read whatever comes next.
Posted by bobbie killip at 10:17