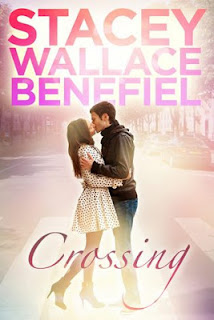 Published by: Write Free/All Night Reads
Release date: 8th May 2013
Series: n/a
I got it from: NetGalley
Quote:
"What's more important? Loving the man that loves you, or trying to achieve this bullshit idea you have of what a perfect relationship is supposed to be?"

Goodreads summary:
He stole her lipstick…and her heart.

Twenty-year-old Dani Walker can’t believe her luck when she’s paired up with the gorgeous Liam Garrett as her Acting I scene partner – or when he ends up in her bed. Being a Plain Jane with a mouth on her hasn’t exactly served Dani well in the guy department. In fact, she’s had nothing but one night stands. Still, she lets go of her insecurities and falls for Liam, despite feeling like he’s holding something back.

When Dani finally discovers Liam’s secret, she must learn the true meaning of accepting the ones we love for who they are, or risk losing the best thing that’s ever happened to her.

My review:
After reading Found, Benefiel's YA paranormal follow-up to the Zellie Wells trilogy (review here), I was happy to read whatever I could get my hands on by the author. Bizarrely, I'd already seen Crossing listed on Netgalley but had dismissed it in a bad case of judging a book by its cover. I couldn't have been more wrong. When you see the kissing couple and pinkness of the cover you could be forgiven for expecting a fluffy tale of happy romance. What you're getting is a deep, personal and boundary-destroying love story.

Dani is an unusual character. She's very insecure with self-image issues and has had to deal with some hard life lessons. She has a very well developed sense of humour, and she's very open and accepting. She dances with drag queens, loves acting and writing, she says what she thinks and gives amazing foot massages. She has a low opinion of herself though, never seeing herself in the starring role - always the kookie best friend. She needs someone to lift her up, to show her that she is beautiful and talented...

If Dani is a great heroine, Liam is an incredible hero. He has a big secret, which I'm not going to reveal so don't worry. He's conventionally gorgeous, but also full of wit and surprisingly down-to-earth. I think his secret makes him a very different person from who he could have been if he was conventional through and through. He's a hottie with a heart and a conscience. He's just come out of a long-term relationship, so you know he's not a commitment-phobe. He's not really bitter about it (well he is a bit, but in an understandable and acceptable way), and he's not out to shag everything that moves in a making-up-for-lost-time way. He's the perfect man, except for the secret.

A chance incident brings Dani and Liam together, and you can see that they have an instant connection. Their banter is hilarious. Here are two people who are meant for each other, and you're rooting for them all the way though. They have some pretty hefty stuff to work through, but you know that if they can work it out they'll be immensely happy together. Both characters were so likeable that they completely drew me into their lives, made me love them absolutely and want the very best for them. I feel like they're my best friends!

The way Dani deals with Liam is just brilliant. Because she's never been in a relationship and has such a low opinion of herself, she doesn't expect anything and doesn't push. She realises early on that there's something not quite right, but she doesn't want to risk losing everything, so she just leaves it. No hassle, no drama. When she does find out the full story, she's amazing. Lots of people say they didn't see the twist coming, but I have to say I saw it straight away. This didn't diminish my enjoyment of the book at all though, so if you're as perceptive as I am, don't worry - just  relax and enjoy the ride.

Crossing is all kinds of wonderful. It's funny, touching, brave and daring. And it's based on a true story, which makes it even more so. I feel priveledged that I've been allowed to share this story.
Posted by bobbie killip at 08:00