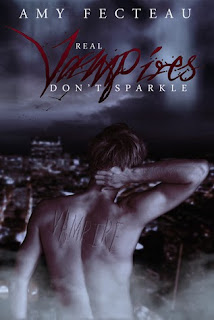 To be fair, the percentage of people actually asking to be murdered is probably small enough to be safely ignored, but he felt it was worth stating regardless.

His life might have been ordinary, but it was his life and he wasn’t done with it yet. Quin didn’t care. A seventeen-hundred old Roman, Quintus Livius Saturnius had a different view of morality than most people. Killing Matheus and hijacking his undead existence seemed perfectly acceptable to him.

Now, Matheus spends his nights running for his life, questioning his sexual orientation, and defying a mysterious new threat to the vampires within his city. Not that he set out to do any defying; he just wanted to be left alone.

Unfortunately, that was never going to happen.

My review:
This book has the feel of a self-published. This isn't a bad thing, although the editing could do with a bit of work. It's just that it has a very different kind of voice from your bog-standard main-stream publisher's offerings. It's unusual to find this level of sarcasm for a start.

Real Vampires Don't Sparkle isn't really my usual kind of book. Yes, I'm partial to the blood-sucking monsters, but I don't usually go for homoerotica. I found the relationship between Matheus and Quin very interesting though. The whole 'I'm not gay, I'm not gay, acutally...' thing is something of a mystery to me - all of the gay people I know have always known what they are, so the concept of suppressed sexual feelings is a new subject for me.

The humour running through the book kept it quite light, despite the often dark scenes. I have to admit though that I did find the constant stream of sarcasm and pithy come-backs a little wearing after a while. I began to wonder if any of these people ever say what they really feel. I can completely understand the use of wit and sarcasm as a defense mechanism, but I think you do need a bit of straight forward honesty from time to time, and there isn't really enough of that in this book.

RVDS is very much a dialogue-led book. There is a story in there, with a good dose of action, adventure and danger, but it's the dialogue which drags it along at a cracking pace. I would have been interested to hear a bit more of Quin's history, although he doesn't dwell on it himself so perhaps sharing it with the reader would have little point.
Posted by bobbie killip at 10:54