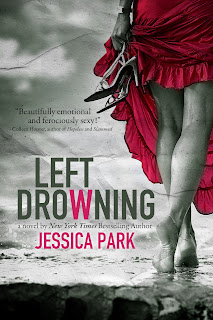 Published by: Amazon Children's Publishing
Release date: 16th July 2013
Series: n/a
I got it from: ARC from author
Goodreads summary:
Weighted down by the loss of her parents, Blythe McGuire struggles to keep her head above water as she trudges through her last year at Matthews College. Then a chance meeting sends Blythe crashing into something she doesn’t expect—an undeniable attraction to a dark-haired senior named Chris Shepherd, whose past may be even more complicated than her own. As their relationship deepens, Chris pulls Blythe out of the stupor she’s been in since the night a fire took half her family. She begins to heal, and even, haltingly, to love this guy who helps her find new paths to pleasure and self-discovery. But as Blythe moves into calmer waters, she realizes Chris is the one still strangled by his family’s traumatic history. As dark currents threaten to pull him under, Blythe may be the only person who can keep him from drowning.

My review:
I wish I could have the characters from this book in my life, because they're all incredible. Totally un-put-down-able, Left Drowning is an exceptional love story full of very messed up, but completely beautiful people. Blythe is the girl with issues at the start - barely surviving after a tragedy that broke her world apart, when a chance meeting drives her to start living again.

Sabin is the first of the Shepherds that Blythe meets. Sabin is theatre guy - outrageous and crazy and full of life, dropping into Blythe's world and waking her up more than the coffee he stole ever could. Christopher comes next - grounding Blythe right from the start more than he knows. Estelle & Eric soon follow, each worming their way into her life in their own inimitable way. Chris may be the one she lusts after, but all of the Shepherds play their own part in bringing Blythe back to life, and I love that.

So, Christopher Shepherd. Wow. Be warned - this book is seriously sexy in parts. Chris does things to Blythe that made me want to swoon. Things may not always be plain sailing with these two - in fact their relationship is questionable at the best of times - but when they do get it on, they are hot!

The Shepherds offered Blythe family when she needed it most, but we mustn't overlook her own family, small as it is. If we cast aside the cold-fish aunt, we're left with James, Blythe's younger brother. He doesn't have a huge part to play lines-wise, but he does feature heavily in Blythe's past map of guilt and distress. He is an important character, and he is a sweetie. I'd rather like to hear his story, is if you're looking for inspiration, Ms Parks, how about giving James a voice?

One of the things Blythe doesn't realise, as they put her back together, is the full extent of the Shepherds' own painful tangle of issues. They do so well at hiding it, always looking forward, never casting an eye back to the past. Bit it's there alright, and you can't choose to ignore the past forever. At some point you're going to have to face up to it and deal with it. Can Blythe help the Shepherds' in the way that they helped her?

One of the things I especially loved was the way Parks intertwined the fates of these two lovers. She does it so gently that we don't even realise it at first, and neither do they. Little by little though, more is revealed, and you realise that there is more to this story than meets the eye. This involvement of fate rises Left Drowning way above the tide of NA that is currently flooding our shelves. Because this is more than just another NA book. This is one that you don't want to put down ever. I want the characters to be my best friends forever. I felt so good at the end, knowing that it wasn't really the end of the story, but a whole bunch of new beginnings.