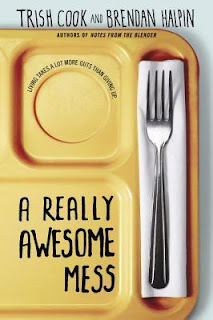 Published by: Egmont USA
Release date: 23rd July 2013
Series: n/a
I got it from: NetGalley
Goodreads summary:
A hint of Recovery Road, a sample of Nick and Norah's Infinite Playlist, and a cut of Juno. A Really Awesome Mess is a laugh-out-loud, gut-wrenching/heart-warming story of two teenagers struggling to find love and themselves.

Two teenagers. Two very bumpy roads taken that lead to Heartland Academy.
Justin was just having fun, but when his dad walked in on him with a girl in a very compromising position, Justin's summer took a quick turn for the worse. His parents' divorce put Justin on rocky mental ground, and after a handful of Tylenol lands him in the hospital, he has really hit rock bottom.

Emmy never felt like part of her family. She was adopted from China. Her parents and sister tower over her and look like they came out of a Ralph Lauren catalog-- and Emmy definitely doesn't. After a scandalous photo of Emmy leads to vicious rumors around school, she threatens the boy who started it all on Facebook.

Justin and Emmy arrive at Heartland Academy, a reform school that will force them to deal with their issues, damaged souls with little patience for authority. But along the way they will find a ragtag group of teens who are just as broken, stubborn, and full of sarcasm as themselves. In the end, they might even call each other friends.
A funny, sad, and remarkable story, A Really Awesome Mess is a journey of friendship and self-discovery that teen readers will surely sign up for.

I guess there's a certain happy-ever-after thrill - the inevitable break-through, turning their lives around and working out how to be a fully-functioning member of society, possibly falling in love somewhere along the line, or at least making some good friends. That's not a spoiler by the way - I'm only about a third of the way through the book at this time, so it's more of a prediction. I may be proved wrong.

Then there's the disaster aspect - their lives are much worse than mine, which makes me feel better about myself and my situation. Or for some people, maybe it's identifying with something you've been through yourself.

What actually appeals to me above all else, is the what-if. How many times have you wanted, however deep down, to 'act out' in the way that these kids do? To scream and shout, rant and trash stuff, hit people that annoy you and generally make a spectacle of yourself? I love the parts where the characters are messing things up as much as possible, doing damage to themselves and the people around them, because as a fairly level-headed person I've not actually done those things, but I've been sorely tempted many times. Actually, there is a certain level of identification for me, because I have done stuff, albeit on a smaller scale, that I'm not really proud of.

All of these aspects come together to form a story that, for me, is addictive. But let's get reviewing before this turns into a personal therapy session. I have now finished the book. I'm not going to tell you whether my prediction was right, I'll just say that the ending was my favourite kind - the type that's not really an ending.

There are so many things I love about this book. One of them is the dual PoV. I'm a sucker for it. Why would any book not give me the boy's thoughts as well as the girl's? I want, nay, need them both! Having two writers makes the two characters feel completely real - they're very different people, each with a distinctive voice. Emmy is a good character, a real person. She's got some problems, but they're not all as bad as she thinks they are. Though some are actually worse than she thinks. It's easy to blow everything out of proportion when you're a hormonal teen, and it's easy to react to situations in an inappropriate way. That's what's happened to Emmy - there's nothing fundamentally wrong with her, and I think eventually she can be a happy, well person. This is just a part of her journey.

Justin is another matter - his problems are more easily medically-diagnosed. He's always going to have to fight the depression, which is a major thing to come to terms with. While the book starts with more of a focus on Emmy, whose problems seem worse at the time, by the end the focus has switched to Justin. I think he has further to go than Emmy, which added a realistic tint - it's not all 'oh we'll get better together and then be happy forever!'.

Emmy and Justin arrive at Assland (you'll get it) at the same time, both believing they don't belong there at all, thinking they can just fob off the therapists with some well-chosen words and be out of there in no time. Obviously it doesn't work like that. It takes a while for them both to come to terms with the fact that they need to be there, but while they're doing that they both appreciate having someone to share jokes and eye-rolls with. Once they start to realise that there might actually be a reason for being there, things start to get interesting. That's when the Anger Management group comes in. Emmy and Justin are in the same group, along with a few other 'students', all with different issues. When they come together for sessions, these guys are hilarious. I loved their sessions. The group are made to work together and support each other full-time, and after some teething problems they really click. There's a slightly cheesy element where they all manage to confront their problems in one way or another, but this is a light-hearted read, considering the subject-matter, and that is what they're there for after all.

I'm not going to go into it too much more. Suffice to say that A Really Awesome Mess is all kinds on wonderful. It's a fairly short read, but I loved every minute of it. I've been looking forward to reading it since I saw it on NetGalley, and it's lived up to my expectations, even surpassing them. You'll laugh, you'll cry, you'll feel everything. The characters feel incredibly real, and so do their problems. I really want to read more from these guys.
Posted by bobbie killip at 12:16