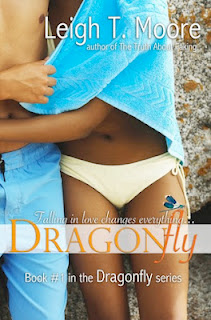 Published by: All Night Reads
Release date: 6th June 2013
Series: Dragonfly #1
I got it from: NetGalley

Goodreads summary:
Three bad things I learned this year:
-People you trust lie, even parents.
-That hot guy, the one who's totally into you, he might not be the one.
-Things are not always how they appear.

Three good things I learned this year:
-Best friends are always there for you, even when they're far away.
-That other hot guy, the one who remembers your birthday, he just might be the one.
-Oh, and things are not always how they appear.

When her best friend moves at the start of senior year, Anna Sanders resolves to keep her head down and follow her plans through graduation. Until Lucy, a beautiful, mysterious girl, and Jack, her gorgeous twin brother, transfer to Anna's school.

The two draw Anna into their rich, extravagant life on the Gulf Coast with their distant, single father. Anna can't resist falling for Jack, even after he pushes her away.

Just when she's finally learning to be strong, Anna uncovers their father's closely guarded secret and is pulled back--this time even closer. His secret could change all their lives.

My review:
Gosh, Anna's annoying! I had to keep reading this book because I needed to make it to the end to see if she could actually make a good decision for once in her life. She kept annoying me right up til the end though. I think maybe I'm too old for this book. I get that when you're young you can get confused between love and lust, and everything seems like a massive drama, and you have a totally irrational sense of self-entitlement, but there's really no need to shove all the most infuriating parts of a teenager into a book.

Anna strings along two boys, butts her nose in where it doesn't belong, is modest to the point of irritation (oh but why do you like me? I'm not pretty!), and is generally a poor excuse for a character. I feel sorry for both the boys trying to get her. They should really cut their losses and look elsewhere.

It's a real shame, because it's not that bad a book, it's just the main character who is really annoying. Have I used that word enough yet? I can't help it, it's just the most perfect word to use to describe her. But really, the elements are all there. If we lost the pointless investigative journalist has to uncover the big secret part, and made the female lead someone we could actually like, then Dragonfly could be a great book.

I like both the guys in the book - they're perfect opposites. Jack is the rich boy disenchanted with his life, under pressure from his dad to push harder and be a success, and let's be fair, he does warn Anna right from the start that he isn't in a position to get involved. She just gets under his skin (yeah she does that to me too, just not in a good way!). Can such a vacuous, nosy girl really be that appealing? Then there's Julian - he's known Anna for over a year, so he really should know better. There must be something about this girl that we're not being shown, otherwise why on earth would the hot sculptor fall for her? I'm team Julian all the way. A surfer artist who also happens to be a chilled, nice, sensitive and romantic type? Who wouldn't fall for him?

Also, be ready - there is no ending! The darn thing's part of a series. I was all set for getting to the bottom of the big mystery (which Anna had no business knowing about, and definitely no business getting all involved in), and getting a happily ever after with the right guy finally, but no - it just finished abruptly, as if cut off mid-scene. Now I have to stop myself from being tempted to read the next installment, as I really don't think I can take another book's worth of Anna!

As always, I want to apologise for writing a less-than-lovely review. I don't like doing it, and I want to make it clear that this is my personal opinion. If you take a look on Goodreads you'll see that other readers have different opinions of this book so if you think you might like it please give it a chance. You might get on just fine with Anna!
Posted by bobbie killip at 08:00