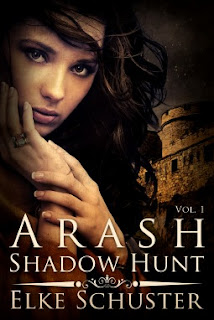 Published by: Smith Publicity
Release date: 16th May 2013
Series: Shadow Hunt #1
I got it from: Netgalley
Goodreads summary:
Author Elke Schuster is addicted to creating new worlds and settings. When she woke one morning with a particular fantasy story in mind she knew she needed some special creatures to go along with it. Fairies? No. Vampires? Overdone. When a friend suggested that angels were the ‘new’ vampires she mulled it over and introduced a new player in the world of fantasy creatures: the Arash, descendants of the stars whose name mean ‘bright’. More human than vampires, but powerful enough to be alluring, Schuster made them into the “stars” of her newest release Arash, Vol. 1, Shadow Hunt, the first in a four-book series.

Livia is the black sheep of her family, self-conscious and underachieving. That is, until she meets her new friends: the exuberant Natalie, her brother Rupert, the sculptor, intelligent librarian Will, stunning interior designer Ruth, and arrogant horse breeder Cassius. The group of mismatched friends makes Livia feel as if she may fit in somewhere for the first time in her life. Then she begins to suspect that her so-called friends are not who they claim to be. They hold a secret that could change Livia’s life forever.

Will her great love for one of them survive the challenges of becoming an immortal Arash? Will Livia herself manage to survive?

My review:
Diving right in, I found the way the book was written in third person present tense somewhat disconcerting to start with, but after a short while I got used to it and it kind of worked, even if it did have a slight 'school essay' feel to it. Using the third person enables us to see what is going on with various different characters, which is always a bonus. I'm sort-of in love with first-person writing at the moment, but it can be restrictive when it comes to the storyline - you only ever get one side of the story.

Livia is ok, as heroines go - her inner monologue (which intersperses the main third-person narrative) gets a little whiny at times, but it is an inner monologue and if you can't whine to yourself now and then, when can you? With the help of the Arash, she discovers her own strengths and becomes a much more likeable character as the book goes on. At the start she's a bit wishy-washy, but she comes into herself by the end. I quite liked that she's not all good. She makes some bad choices that I have a feeling are going to rear up and bite her at some point, but that's life.

The Arash characters are a mixed bunch. Natalie is an enthusiastic friend, but a bit too bubbly for my taste at times. Ruth is a first-class bitch, and you have to admire her a little for it. Rupert I found a bit inconsistent - he doesn't really fit the artsy sculptor character that I felt he should be. Will is a sweetie, not an important character in this book but a good foundation for the future I feel. Cassius is hot. I would really have liked to get to know what's going on in his head more.

The family of Arash reminded me a little of the Cullens in Twilight - a voluntary family, who have come together because they fit well with one another and enjoy each other's company. They are more loyal and companionable than most natural families, which is good because when you're together for centuries you really need to make sure you get on well.

A few of the Arash's abilities did feel like they had been shoehorned in for the sake of the story, but I'm happy to overlook that - what's the point in making up your own beings if you can't give them the abilities they need to make it through whatever you throw at them? The problem I had with the third person present tense narrative is that you don't really get a feel for the inner characters of the Arash. What is life like for these people, who have lived for so long, and when they're not on the hunt for a new member, what do they get up to?

I'm interested to read the next book in the series, as I feel that this race of immortals can be developed and explored a lot more. We're only just getting to know them now, and I think they have a lot more to offer.
Posted by bobbie killip at 10:13