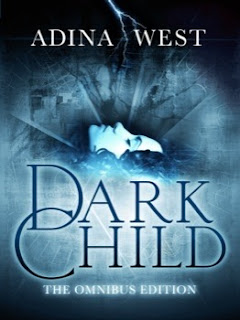 Published by: Momentum
Release date: 1st June 2013
Series: Dark Child #1-5
I got it from: NetGalley
Goodreads summary:
Perfect for fans of The Mortal Instruments series by Cassandra Clare, this intriguing urban fantasy follows the story of Kat Chanter, who discovers that the world she knows is controlled by ancient creatures who feed on blood. And she might just be one of them ...

Lately things have been getting weird for pathology technician Kat Chanter. She's been craving raw meat, and having dreams so realistic they're scary. When she accepts a job offer from the prestigious Hema Castus Research Institute, she hopes she'll have the chance to discover what's wrong with her, but instead, her move to New York thrusts her headlong into a treacherous hidden world, where the wrong move could be fatal . . .
Tarot, witchcraft and astrology all take on a frightening resonance in Dark Child's richly imagined alternative reality where vampiric beings live among us, hidden by magic. Dark romance tangles with paranormal fantasy and page-turning suspense in this enthralling tale of 'dark child' Kat Chanter, half-human and half-vampire, who has woken an ancient prophecy and must face a formidable destiny.

My review:
The premise of this book was very interesting, but when I started reading I found it took a long time to get going. Once it did get going a bit more, I did get into it, but not really into it. It didn't have that addictive, page-turner, must-reach-the-end-now feeling to it. It felt a bit cliched if I'm honest, a bit too similar to lots of other paranormal books out there. There are a couple of nice touches, such as the different types of beings and their various talents, but the whole 'big health corporation being a front for a load of bloodsuckers'? It seemed a bit jaded.

I liked Kat well enough but I didn't feel we really got to know her well enough. Her voice just didn't feel all that strong to me. She was very quick to accept the whole 'vampires exist' situation, but then I guess her cravings for raw meat, the weirdness of her blood sample and her experience at the club must have aided her acceptance.

I was surprised that there wasn't more romance involved actually. The lack of it totally made sense with what was going on at the time, and the amount of time that the characters had known one another, but I actually felt a bit lost without it. Dark Child reads like an adult paranormal romance, but the fact that there's barely any romance left me wanting somewhat. The two shapeshifters who are interested in Kat are your typical brooding, dark characters - one with a hero complex, the other a bit of a bastard just to make sure there's something for everyone. They're undeniably hot, but the lack of action made them a bit superfluous.

Considering it was originally released in serial form, the book holds together well. There are no obvious breaks, and if I didn't know it was a serial then I wouldn't have guessed it. I have no idea why it's touted as 'perfect for fans of The Mortal Instruments' - as far as I can see there are no similarities, and as a fan of The Mortal Instruments I wasn't won over by Dark Child as much as I wanted to be. There are some aspects of it that I really like - the different types of vampires and their legends mainly - but there were too many characters in my opinion, making it overly complex. I would read the next book, as I have a feeling that it might be better than the first, with more action, now that the scene has been set.
Posted by bobbie killip at 09:22