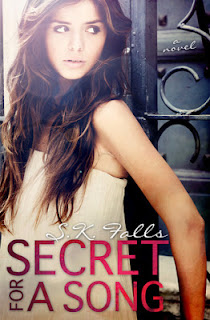 She ate her first needle when she was seven. Now, at nineteen, she’s been kicked out of college for poisoning herself with laxatives. The shrinks call it Munchausen Syndrome. All Saylor knows is that when she’s ill, her normally distant mother pays attention and the doctors and nurses make her feel special.

Then she meets Drew Dean, the leader of a local support group for those with terminal diseases. When he mistakes her for a new member, Saylor knows she should correct him. But she can’t bring herself to, not after she’s welcomed into a new circle of friends. Friends who, like Drew, all have illnesses ready to claim their independence or their lives.

For the first time, Saylor finds out what it feels like to be in love, to have friends who genuinely care about her. But secrets have a way of revealing themselves. What will happen when Saylor’s is out?

My review:
This book is equal parts annoying, depressing and addictive.

Annoying because of the whole MS thing. Anyone who knows anything about MS would question the girl's claim to have it. She had none of the symptoms that are a reason for diagnosis. I would have thought Drew especially would have realised it as many symptoms are similar to his disease.

Depressing because... I can't really put my finger on it, it just is. Perhaps because of the secret. I can't help but compare this book to The Fault in our Stars by John Green, and I can't help finding it wanting. TFIOS is so uplifting, so heartwarming, and so not about the diseases that make it. Secret for a Song is about nothing but the diseases and syndromes that fill its pages.

Addictive because despite all this, I still kind of liked Saylor. I really wanted her to work things out, to help herself and find a way to live a good life. Between all the lies, she knows in her heart what is right, and she's not a bad person, just a messed up one. You know that things can't possibly work out all hunky-dory. There's a glimmer of hope, that there will be understanding and forgiveness. Whether there is or not, you'll have to find out for yourself.

I don't know much about Munchausen's and have never met anyone with it, so I don't know if it's portrayed well or not. I thought it seemed realistic the way Saylor veered between not admitting her shameful (to her) problem, and talking about it with candid detachment. It was as if she was saying This is who I am, but it's not who I want to be. But I'm not ready to be anyone else at the moment.