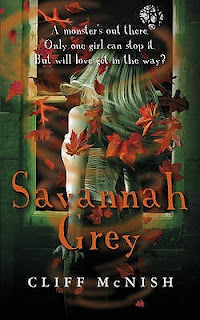 Published by: Orion Children's
Release date: 4th February 2010
Series: n/a
I got it from: Library

15-year-old Savannah Grey has never felt she's belonged. She keeps her distance, so she's surprised by her attraction to the new boy Reece. Then strange things begin to happen: nature, it seems, is exerting an overpowering force on the world. Birds behave strangely; gusts of wind blow leaves so fiercely they seem to lure people away. And Savannah learns she has supernatural powers. Nature has a purpose for Savannah and her friends. They are on course to meet the vile and evil Orcrassa, who wants to destroy the world by corrupting nature and it wants Savannah Grey to help realize its savage intent.

My review:
This is a strange tale. I've noticed when reading British fiction that it tends to be a lot less formulaic than its US counterparts. A lot more... different. Savannah Grey is more different than most. Part sci-fi, part supernatural, part nightmare.

Savannah is a normal(ish) 15 year old girl, but she is changing. Strange things are happening to her body, specifically her throat, and she doesn't know if she has some hideous disease or she's turning into a monster.

The Orcrassa is the monster to end all monsters. It has been on Earth for millenia, evolving and upgrading. It wants to devour everything. To help it on its way, it has created two lesser monsters - the Nyktomorph and its child The Horror. All of the monsters are wonderfully realised, crafted in such a way that they are at once faintly ridiculous and incredibly scary. Like a child's picture of an imaginary monster come to life. The Orcrassa has a terrifying intelligence and the complete psychopathic detachment of a super-villain. These are the most monstrous monsters I've ever come across.

It's hard to know what to write about this book - it's so unique. There's action, but it's not an action story; there's superpowers, but it's not a superhero story; there's horror, but it's not a horror story; there's romance, but it's not a romance story. What it is, is something brand new, and that's rare. The weird thing is, I'm not sure if I liked it or not. I can see the quality of it, the talent of the author and the genius of his work, but I can't identify with the characters. Savannah is at once brilliant and remote. She's moved from foster home to foster home, of her own accord. She's not a messed-up care system child though, she's independent and brave, surprisingly well-adjusted and level-headed. Even when she's turning into a monster, panicking and not knowing what to do, she's also somehow aloof and confident.

I think readers on the younger end of the young adult scale would enjoy this more than older readers - the pacing, the weird nightmarish monsters, the elusive romance are all what you would expect from an older children's book. This is most definitely the type of book I can see being included in a GCSE English Lit syllabus, to be read and discussed and have essays written about. This a compliment, in case you're wondering!

Read Savannah Grey if you're in the mood for something different, something genre-defying that will make you think and inspire your nightmares!
Posted by bobbie killip at 16:43