Review: Dare You To by Kate McGarry 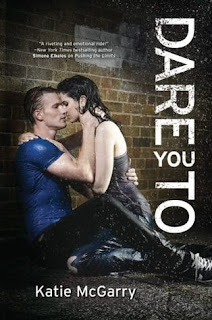 Published by: Harlequin Teen
Release date: 28th May 2013
Series: Pushing the Limits #2
I got it from: NetGalley
Quote:"The words sting, but I struggle to keep the pain from surfacing. What more should I expect? He's everything that's right with the world. I'm everything wrong. Guys like him don't go for girls like me."

Goodreads summary:
If anyone knew the truth about Beth Risk's home life, they'd send her mother to jail and seventeen-year-old Beth who knows where. So she protects her mom at all costs. Until the day her uncle swoops in and forces Beth to choose between her mom's freedom and her own happiness. That's how Beth finds herself living with an aunt who doesn't want her and going to a school that doesn't understand her. At all. Except for the one guy who shouldn't get her, but does....

Ryan Stone is the town golden boy, a popular baseball star jock-with secrets he can't tell anyone. Not even the friends he shares everything with, including the constant dares to do crazy things. The craziest? Asking out the Skater girl who couldn't be less interested in him.

But what begins as a dare becomes an intense attraction neither Ryan nor Beth expected. Suddenly, the boy with the flawless image risks his dreams-and his life-for the girl he loves, and the girl who won't let anyone get too close is daring herself to want it all...

My review:
It took me a while to decide whether Dare to You should be classed as Young Adult of New Adult. I decided on Young Adult in the end, as the characters are still at high school and there's not a whole lot of steamy sex scenes. That said, there is a fair bit of intimate action and the whole feel of the book is somewhat New Adult-ish - the issues that the characters have to deal with and the way their lives play out, and the formulaic on/off romance. So I'm still a bit undecided - please feel free to let me know what you think!

The New Adult aspects of the book made me have a hard time putting it down - I'm becoming a little bit addicted to the intense relationships and messed-up lives of the NA character set. I found the whole 'using a dare as a plot device' thing a bit jaded and over-used - it's not exactly a new idea - but McGarry makes good use of it and allows it to be a fun starting point while not over-egging it too much. After all boys will be boys, and they do stupid dares that sometimes hurt people. Ryan did a lot of growing up between asking for Beth's number for a dare and the end of the book, and let's face it - it was necessary. There's a reason why YA heroes are usually old before their time - teenage boys are annoying! Especially jocks.

Now, I haven't read McGarry's other book in the series - Pushing the Limits. While I was reading, that didn't bother me - the two books focus on different characters within a group, and while there are references to the characters in the other book in each of them, they stand alone as stories in their own right. But, having read others' reviews, I might have felt a bit differently about the whole Ryan vs Isaiah thing if I had read Pushing the Limits. To me, Isaiah was a slightly annoying side-character. I get that Beth has known him for a long time and he's been there for her when she needed him, but I also think that he's a bit too needy himself, and has been taking advantage of Beth when she's been in a bad place. So sorry to all you Team Isaiah people, but maybe I'll feel differently after I read Pushing the Limits.

There are some pretty hefty issues dealt with in this book - Beth's mother is a drug addict and alcoholic, and the mother's boyfriend is really bad news - so much so that Beth can no longer live at home for fear of her safety. When her uncle rescues her and takes her to live with him, Beth is torn between the opportunity to start a new life, one which might take her places, and looking after her mother who can't be relied on to look after herself. Beth's uncle's tactics are serious - no contact at all with her mother. He's seen what getting caught up in that life can do, and he wants to give Beth the opportunity to get out. Of course, by forbidding contact he only pushes Beth back towards her mother harder. Uncle Scott isn't the brightest, but his intentions are good.

Everything about Beth and Ryan is wrong - these two people should not be together in any way, and yet there's no denying the chemistry between them. There's also that thing going on where they each make the other a better person. When Ryan's with Beth he's not just a jock, and she gives him the strength he needs to deal with his own problems - which shouldn't really be problems at all. When Beth is with Ryan she can actually start to see that there could be some good in her life. As is to be expected, these two young people are each messed up in their own way. Beth more so - she's had a hard time so far, and it's made her so utterly convinced that she can't have a chance at a good life, that she actually fights against it until she's forced to face it. It's hard for her to trust anyone, which is understandable but drove me a bit crazy. It's always the way though - you're screaming at a character to sort themselves out and do the right thing, but if they did that in the first place then the book wouldn't be what it is.

Ryan's little issue threw me to start with - I'd forgotten just how narrow-minded some Americans can be, but then when Beth found out and we saw her attitude, and Ryan's reaction to her attitude, things started to fall into place. For me Ryan was a lot harder to understand than Beth. I haven't had to deal with anywhere near the problems that Beth has, but my mindset is still closer to hers than Ryan's. I've never even known a jock, so I don't really have a point of reference apart from US teen movies! So to start with I didn't really get him, and I didn't especially like him. But by the end, I knew that he was the one for Beth.

It's emotional, it's gritty, and it's addictive. Now I need to get me a copy of Pushing the Limits!
Posted by bobbie killip at 09:09