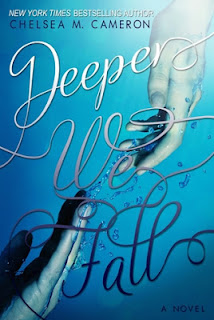 Published by: DRC Publishing (All Night Reads)
Release date: 24th January 2013
Series: Fall and Rise #1
I got it from: NetGalley

Goodreads summary:
Two years after her best friend was involved in a car accident that caused a traumatic brain injury, Lottie Anders is ready to start her freshman year of college. Ready to move on. Ready to start forgetting the night that ripped her life apart.

Her plans come to a screeching halt when not one, but both brothers responsible for the accident end up back in her life again.

Zack is cruel, selfish and constantly rubbing what happened to her friend in Lottie's face.

Zan is different. He listens to her awkward ramblings. He loves "To Kill a Mockingbird" as much as she does, and his dark eyes are irresistible. His words are few and far between, but when he does speak, she can't help but listen.

The trouble is, Zan was the driver in the accident, and now Lottie's discovered he lied to her about what happened that night. Now she must decide if trusting him again will lead to real forgiveness, or deeper heartache.

My Review
It's often hard to tell just by the blurb on the back of a book, or a synopsis online, whether a book is really going to suit you. If I'm in a bookshop, I can dip in to a random page and see if I like the writing style, but when I'm ordering a book online that's not an option, so I have to take a chance. Some books I get to review don't really grab me, and reading them becomes something of a chore. Then there's the books that come along now and again which just suck me right in, until I'm living, loving and breathing them. Deeper We Fall is one of those books.

I've totally fallen for a certain kind of NA book - the ones about that first love, a love so deep and intense that you know it's forever. I'm lucky enough to have that love, so I know it's real, and I love reading about it. But I loved Deeper We Fall particularly because of the way Cameron has shaken up the usual formula. You know the one - we spend the first half of the book watching the girl and the boy get together against their better judgement, everything is sweet for a while then something happens to mess it all up and we spend the second half of the book watching them put it all back together again. Deeper We Fall doesn't really work like that, because everything is messed up from the start...

Lottie blames herself for what happened to her best friend Lexie. If she had stopped Lexie from getting in the car, then Lexie wouldn't have ended up brain-damaged and needing 24 hour care. Even more than she blames herself though, she blames Zack, the guy who persuaded Lexie to get in the car, and his brother Zan - the one who was driving when they crashed. Lottie has been full of grief and hate ever since that night, so when, two years later, she discovers that the very objects of her hatred are going to be living in the same dorm building as her, she doesn't know how to handle it.

Another difference in Deeper We Fall, is Will - Lottie's twin brother. Sometimes our heroine has a sibling that they're close to, but the extremely close relationship that twins share is uncommon. Will is always there for Lottie. She doesn't need the shoulder of a nice guy to cry on, because she already has her brother. The two share a special connection, a 'twindar' that means they know what each other is feeling and can tell if the other is in trouble. This interesting and unusual relationship gives the book much more depth - it's not just about the romance. The friendships that Lottie strikes up add a further dimension to the book and the way we see Lottie. Also, the characters around Lottie and Zan are not just there for support - they're fully-fledged people in their own right, and I wanted to follow their stories just as much as Lottie's. It's rare to find such a well-developed cast along with such a multi-faceted story.

I got on well with Lottie - I like to think that if I was in that situation I would react in a similar way. Her hatred of the guys who caused her best friend to be taken away from her is totally understandable. Her involuntary reaction to Zan is also understandable - sometimes chemistry just hits you, and something inside of you calls to something inside of someone else. We don't see Lottie making a ton of bad decisions, messing up her own life and being a drama queen. We do see her struggling with the blame that she has taken on herself, and her belief that she is in some way betraying Lexie by even talking to Zan, and I find those feelings and reactions perfectly believable and real. The only part about Lottie that I found a little hard to swallow was the fact that she's apparently this gorgeous blonde bombshell who doesn't realise it, and who hasn't really had a proper boyfriend. Sure she could be a late bloomer - I was myself, so I know it happens, but then I'm not a sexy, hot, beautiful blonde! But I'm just going to accept it, because maybe the beauty we see in her is the inner beauty that shines through to her friends. Sorry, that sounds sappy, but she is clearly a lovely person. She has a good heart, she wants to make the people around her happy, and like Zan says, she loves deeply, and that makes people love her deeply back.

So now we come to Zan... he's messed up. He's been in juvenile detention and a special school. He needs his therapist like he needs air, and he's supposed to be on medication to level him out, only instead of taking his meds he runs and reads philosophical poetry. Oh, and he kind of stalks Lottie. Just a bit. He can't help it - he's loved her from afar for a long time - since way before the accident. Now that she's so close, he doesn't quite know what to do. He wants to talk to her, to make her not hate him somehow, but he also wants to run away from her, and from all the feelings that she stirs up in him.

I like the way Zan is handsome in an old-fashioned kind of way. He's a bit dark and mysterious, he exudes an essence of danger, he tries his best to be unapproachable, he broods like a champion, and he has unusual taste in music. He's the archetypal hot weirdo. You can't help falling for Zan, because when you hear what's going on inside his head, you know that even if he did cause a terrible accident, he's not a bad person. He's been through a rough time ever since it happened, and it's made him prickly and lacking in social skills, but inside he's sensitive, deep and full of love and goodness. This is turning into a bit of a flowers and hearts review, which is unintentional, but I'm just going with it. The thing with Zan is that he doesn't know how to express himself, particularly around Lottie, so she doesn't see the real him for a long time. Just getting past the hate that's eating her up is hard enough. She has to try to let go and see him as a normal person, to pretend that he hasn't had this huge and horrible impact on her past, but it's easier said than done.

Cameron writes like I think a lot of the time - I think that's why I loved this book so much. I liked the fact that it's not overly American. It is American, but not in that over-the-top way that can be annoying. The characters like literature and drink tea, and they speak in a sensible way. The only all-American hero is Zack, and it's easy to hate him. I think Cameron must be a bit of a secret Anglophile, and she's certainly a lover of books. Deeper We Fall makes me want to read her other work.
Posted by bobbie killip at 08:00