Review: The Elite by Kiera Cass 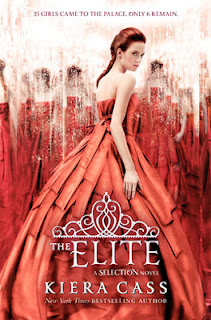 Published by: HarperTeen
Release date: 23rd April 2013
Series: The Selection #2
I got it from: NetGalley
Goodreads summary:
Thirty-five girls came to the palace to compete in the Selection. All but six have been sent home. And only one will get to marry Prince Maxon and be crowned princess of Iléa.

America still isn’t sure where her heart lies. When she’s with Maxon, she’s swept up in their new and breathless romance, and can’t dream of being with anyone else. But whenever she sees Aspen standing guard around the palace, and is overcome with memories of the life they planned to share. With the group narrowed down to the Elite, the other girls are even more determined to win Maxon over—and time is running out for America to decide.

Just when America is sure she’s made her choice, a devastating loss makes her question everything again. And while she’s struggling to imagine her future, the violent rebels that are determined to overthrow the monarchy are growing stronger and their plans could destroy her chance at any kind of happy ending.

My review:
I have kind of a love/hate thing going on with this book. I got the opportunity to read it on NetGalley, but The Selection was still on my 'to read' list. So I grabbed a copy and blew through it (sorry, no time to review!), before moving on to The Elite. The first thing I noticed was how similar the books are. It's not unusual for book 2 to be a continuation of book 1, but in this case there wasn't really enough of a difference in the storyline for me. In fact looking back it seems almost like The Selection is the set-up and The Elite is the main book. Then of course there's a third book still to come, so who knows what will happen there.

Here' the thing - if you have a penchant for love-triangles, you will love this. Personally, I'm not a huge fan. Sometimes they work okay and seem believable, but a lot of the time it seems like they're either the main reason for the book, or just stuffed in for the sake of it. I haven't had the misfortune to fall in love with two people at the same time myself, and I'm afraid I have little sympathy for those who do. So whilst I was intrigued by the world that Cass has created, and I actually quite liked America as a character, I did spend a lot of time wanting to give her a good shake and shout 'get on with it!'.

America's first love, Aspen, didn't really do it for me. I know his type - obsessed by class and too proud for his own good. Prince Maxon was more interesting. He has a certain goodness in him, a way of wanting thing to be right, which was attractive, but he was also rather immature. His lack of even the potential to be a good ruler was a problem, and the way he could quite happily date, get off with and lie to several girls at once brought him down in my estimation. I did feel for him, the way America kept stringing him along, but he didn't react to it in the best way. So between the sweet, romantic scenes where our two main protagonists do manage to act towards one another with maturity and sensitivity, and the many and varied examples of back-stabbing and two-timing, The Elite is quite a rollercoaster.

I would actually liked to have seen more of the conflict and politics that are shaping the young kingdom of Ilea, which makes a change for me as usually I find myself skipping a line here and there when it comes to the serious stuff. In this case though, it offers a welcome distraction from the raging teen hormones! I hope that the glimpses of unrest, the raids and issues with the caste system that we get in The Elite, will be made more of in the next book, as I think the story needs the substance they provide.
Posted by bobbie killip at 09:06