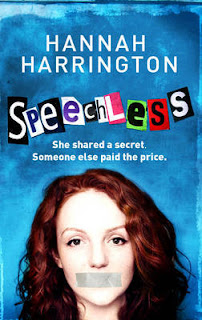 Published by: MIRA Ink (Harlequin)
Release date: 1st Feb 2013
Series: n/a
I got it from: NetGalley

Quote:
"'Hate is...it's too easy,' he says. His face calm, calmer than it has any right to be, his eyes not wavering from mine, like he's so completely sure of what he's saying. 'Love. Love takes courage'."

Until now. Because the last secret she shared turned her into a social outcast—and nearly got someone killed.

Now Chelsea has taken a vow of silence—to learn to keep her mouth shut, and to stop hurting anyone else. And if she thinks keeping secrets is hard, not speaking up when she’s ignored, ridiculed and even attacked is worse.

But there’s strength in silence, and in the new friends who are, shockingly, coming her way—people she never noticed before; a boy she might even fall for. If only her new friends can forgive what she’s done. If only she can forgive herself.

My review:
Speechless was a grower. I was looking forward to it as I absolutely loved Saving June (see my review), but I was kind of disappointed a few pages into Speechless. Chelsea Knot is annoying. At the start of the book she's not really a nice person, and it's hard to identify with her. The thing is though, that's kind of the point - she actually realises that she's not a good person, and she cares enough to want to change. It's brave to make the central character of the book an annoying bitch, as you risk the chance of people not being patient enough to get past the first few pages. It's definitely worth persevering though - Chelsea has some major growing up to do, but she actually does learn from her mistakes, and it's nice to follow her story.

It was interesting to see Chelsea turn from a shallow it-girl into an actual person with a bit of depth. Harrington's writing is really very good - while Chelsea is undertaking her vow of silence, we get to know her inner thoughts pretty well, and she's a very believable character. Being British and the kind of person who would be more likely to be friends with Asha than Chelsea, I did find there was quite a lot about Chelsea that annoyed me even when she started to mature a bit, but that aside I did enjoy reading the book. There's something very compelling about Harrington's writing. She doesn't use up paper on flowery descriptions, instead focusing on feelings and the thoughts behind words. We really get inside Chelsea's head, and the story is a real reminder that people are complex - just because you hang around with the mean-girl, it doesn't automatically make you a mean-girl. I think all kids of Chelsea's age should try being speechless, even if it's just for a day. The importance of words is a lesson that we all need to learn at some point in our life, and not speaking out when you want to makes you think a lot harder about what to say when you do speak out.

Speechless deals with lots of schoolkid issues, homophobia and bullying chief among them, and I did feel a little like the book was a bit too much about the life lessons, but it dealt with the issues in a sensitive and realistic way. I think it's a YA book that's definitely for YA readers, as opposed to many YA books with a cross-over appeal that adults can enjoy too. Personally, I'm way past high school age, so for me it was a bit like a tutorial in what kids are like these days - I can't imagine any kids at my school admitting to being gay, even to their closest friends! An interesting and appealing read - I look forward to seeing what Hannah Harrington comes up with next.
Posted by bobbie killip at 15:46