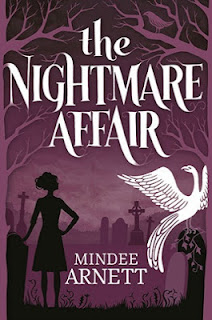 Published by: Tor Teen
Release date: 5th Mar 2013
Series: The Arkwell Academy #1
I got it from: NetGalley

Quote:
"I closed my eyes and exhaled, placing my fingers against his forehead. Bright light burst inside my mind like professional- grade fireworks as my consciousness left my body and entered the dream world of Eli Booker."

Goodreads summary:
Sixteen-year-old Dusty Everhart breaks into houses late at night, but not because she’s a criminal. No, she’s a Nightmare.

Being the only Nightmare at Arkwell Academy, a boarding school for magickind, and living in the shadow of her mother’s infamy, is hard enough. But when Dusty sneaks into Eli Booker’s house, things get a whole lot more complicated. He’s hot, which means sitting on his chest and invading his dreams couldn’t get much more embarrassing. But it does. Eli is dreaming of a murder.

Now Dusty has to follow the clues—both within Eli’s dreams and out of them—to stop the killer before more people turn up dead. And before the killer learns what she’s up to and marks her as the next target.

My review:
The Nightmare Affair was a fun little book, a bit of a change from the YA norm. It was refreshing to read a book that wasn't all about the romance. Sure, there's a light strain of romance weaving through the story, but it's not the be-all and end-all. Instead, what we're presented with is a creepy, flirty, fun and adventurous murder mystery.

Dusty is a Nightmare - a supernatural being that feeds on the dreams of humans. It's not a type of monster I've come across before, and I liked that. I don't know if Nightmares are beings that have been written about before or if it's a new invention of the author's, but it's an interesting departure from the paranormal norm. Dusty goes to school at the Arkwell Academy - a school for supernaturals. The other students are a mixture of the usual suspects - faeries, shapeshifters, sirens and the like, and the school does have certain parallels with Hogwarts, but it's a good setting for the story. Using a school as the setting gives us the usual teen issues of bullying, self-confidence, image and so on, and being a school of supernaturals gives scope for all sorts of interesting situations.

Using the murder mystery angle is a good hook - Dusty's position as a dream-seer means that she is thrown right into the mystery, and along with her dream partner Eli and her friends, she has to try and solve they mystery and stop the murderer before he strikes again. Arnett's writing is light and witty - we're treated to scenes of sqirmy teem awkwardness and delightfully feisty ripostes. Eli's acceptance of the supernatural world he's been introduced to was a little too easy I thought - would a human boy really be so sanguine at being told he has to change schools to a magical academy and take part in sessions in which a girl sits on his chest and feeds on his dreams? I know I'd be freaking out a lot more if it was me! But we don't really need to be subjected to pages of boy-angst, so Arnett's treatment of the situation is acceptable and keeps the story tripping along at a good pace.

The Nightmare Affair is an entertaining debut. I think it would suit the younger end of the YA market best - it was a little bit too light for me personally - but I would definitely read any further books if it becomes a series. I'd like to see the author mature a bit more with experience, and look forward to reading what she has to offer in the future. Oh, and I love the cover!