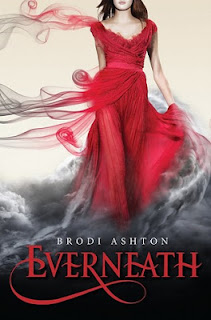 Published by: Simon and Schuster
Release date: 2nd Feb 2012
Series: Everneath #1
I got it from: Library

Quote:
“We’d both been stripped of all the evasiveness, all the lies, everything we’d ever kept from each other. Layer by layer, we had given up our defenses and our excuses and our demands for whys and hows, and what was left were two broken beings. Clinging to one last shred of hope. Tethered to each other.”

Goodreads summary:
Last spring, Nikki Beckett vanished, sucked into an underworld known as the Everneath. Now she's returned--to her old life, her family, her boyfriend--before she's banished back to the underworld... this time forever. She has six months before the Everneath comes to claim her, six months for good-byes she can't find the words for, six months to find redemption, if it exists.

Nikki longs to spend these precious months forgetting the Everneath and trying to reconnect with her boyfriend, Jack, the person most devastated by her disappearance--and the one person she loves more than anything. But there's just one problem: Cole, the smoldering immortal who enticed her to the Everneath in the first place, has followed Nikki home. Cole wants to take over the throne in the underworld and is convinced Nikki is the key to making it happen. And he'll do whatever it takes to bring her back, this time as his queen.

As Nikki's time on the Surface draws to a close and her relationships begin slipping from her grasp, she is forced to make the hardest decision of her life: find a way to cheat fate and remain on the Surface with Jack or return to the Everneath and become Cole's queen.

Everneath is a captivating story of love, loss, and immortality from debut author Brodi Ashton.

My review:
It's not the first time that Greek mythology has been used to inspire a book, but Ashton has done a nice job with her version of the tale of Hades and Persephone.

It took me a little while to get my head around the Everneath - the underworld where Nikki spent a hundred years pouring her every emotion into Cole, feeding him so that he could survive for another hundred years. At first, I had to check to make sure I hadn't missed something and accidentally picked up the second book of a series. Part of my confusion came from the way the book is split into two different time-frames - 'now' - covering the six months that Nikki has left before she's dragged back to the Everneath, and 'last year' - the six months leading up to her choice to join Cole and be his Forfeit. However, once I got used to the style - using the two time frames to tell the story, revealing bits of information here and there - I really got into it.

For some reason I'm finding this book hard to review. I think it's because I feel kind of ambivalent about it. I did enjoy reading it, but I didn't love it. I would definitely read the next book in the series, but I wouldn't rush out and buy it. I think another problem is that I'm on Team Cole. I don't really know why, but I'm just not getting Jack. I did at first - the way his face was the only thing that Nikki remembered from the hundred-year feed, the reason she chose to go back... but as the book progresses I found myself liking him less and less. He's just a bit too good and nice for me.

On the other hand, bad-boy Cole is totally doing it for me! However much Nikki tries to push him away, she can't help reacting to him. He's strong and wild, but every now and then you catch a glimpse of something more inside him. His heart is empty, he feeds off the emotions of humans, so can he really have feelings of his own? He's dark, dangerous and sexy. Oh, and he plays the guitar - what more need I say? It's a nice change from the standard vampires/werewolves/faeries - Cole is a new and addictive kind of monster.

YA paranormal books seem to fall into two main factions - the action-led, and the character-led. There's books that are non-stop action, a rollercoaster-ride of excitement, where people die, heroes fight and villains offer up ultimatums. Then there's books that are full of emotion, where we really get into the character's psyche, feel what they feel and, if the writing is good enough, we develop quite an emotional attachment to the main character, so that what happens to them really matters. (There are a few rare books that manage to merge both types successfully, but we'll talk about that another time). Everneath comes into the character-led camp. It's not as fast-paced as some teen books, with the events covering a whole year - six months in the past and six months in the present (not counting the time that Nikki was missing while the feed happened). That's not a bad thing though - a lot of books rely on a very fast pace and a continuous string of action sequences in order to get you through to the end. Not so with Everneath - we are carried through the book on a tide of emotion instead. From the beginning, where Nikki's emotions are sucked out of her by Cole, it's all about the feelings. Nikki returns to her life empty of emotion but sensitive to the feelings of those around her, and as she goes through the next six months, she gradually learns how to feel things again. Ashton's writing is wonderfully emotive, and it's easy to put yourself in Nikki's place.

I have to admit, I started reading the book a second time in order to write this review, and I'm actually enjoying it more this time around. I guess it's a grower - like some albums, some books take a couple of reads to grow on you and really get into your head. I'll definitely be looking out for Everbound, the next book in the series. Read Everneath if you're into intense romance, love triangles, Greek mythology and loveable villains!