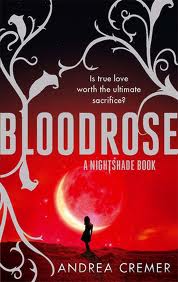 Quote:
"Love wasn't forged by circumstance or changed by sorrow. It simply was. Fierce and free as the wolf within me."

Goodreads summary:
This thrilling sequel to the much-talked-about Nightshade begins just where it ended.Calla Tor wakes up in the lair of the Searchers, her sworn enemy, and she's certain her days are numbered.

But then the Searchers make her an offer,one that gives her the chance to destroy her former masters and save the pack and the man she left behind. Is Ren worth the price of her freedom? And will Shay stand by her side no matter what? Now in control of her own destiny, Calla must decide which battles are worth fighting and how many trials true love can endure and still survive.

My review:
I've just finished reading Bloodrose, and I'm left with that bittersweet feeling you get at the end of a really good series. There's sadness that it's the end of the story, a little regret that I didn't take my time over it more and string it out, but mostly satisfaction from a properly good read, and happiness because it was a truly good ending.

I'm reviewing Wolfsbane and Bloodrose together, partly because I couldn't bear to stop reading for long enough to review Wolfsbane before getting started on Bloodrose, and partly because the story flows so smoothly from one to the next, and the cliffhanger in Wolfsbane means that you really need to have Bloodrose ready to go if you want to avoid frightening your friends and family with your wails of frustration!

I love Andrea Cremer's writing. She somehow manages to hit exactly the right balance between character and action, romance and thrills. Her characters are so real, with barely any prompting at all they come alive in my imagination as I read. Yet there's no time wasted on flowery descriptions of how blue his eyes are, or the feel of his hand on her skin. Cremer deals out just enough description to form a picture in my mind, without losing myself in filling in all the minute details. What really makes her characters is the dialogue between them, the way they all have a fully-formed personality and aren't afraid to use it. I mentioned the group dynamics in my review of Nightshade, and I'm going to add more praise here - the wolf pack and the Searchers team are wonderfully-written groups. The interaction between the group members makes you feel as if you are a part of what's going on - the relationships between the various people are what makes these books so special.

In some ways Cremer's writing reminds me a little of Rachel Caine - her Morganville Vampires series is another of my favourites, and I can definitely see parallels between the two - the pace of the action, the realistic characters and the irreverent dialogue make for ridiculously readable books. I'm also very impressed by the world that Cremer has created - rather than going along with a ready-made werewolf legend, she has built a world of magic that has me hooked. I would have liked it if there'd been a bit more about the Guardians in other countries - why didn't the Searchers attempt to make alliances with any of them? Perhaps they did and it didn't work out, but I think it would have been nice to include at least a couple with the 'good guys'. It might just have confused things though, so I can understand Cremer's decision not to go down that route.

Anyone who bailed out after Nightshade because of the focus on the love triangle is really missing out - Wolfsbane and Bloodrose do continue the theme, but they're also so much more. The twists and turns in the story kept me guessing and glued to the book for hours - I'm afraid my usual schedule was abandoned somewhat while reading these books. I'm disappointed by the number of poor reviews on Goodreads - personally, I think Calla is awesome - maybe as an older reader I get it more - the way she feels she has to do what's best for her pack, whilst at the same time struggling not to give in to her own selfish needs. Life isn't all about just doing what you want, and I think some younger readers may not have learned that lesson yet.

Just one more point - the ending. I am rarely satisfied by endings, but the end of Bloodrose was just about perfect. I really didn't see it coming, and I think it's a brave way to end the series. Congratulations to Cremer on an original and worthy finish to a brilliant series. I will definitely be saving up to buy my own copies, and I look foward to reading the prequels Rift and Rise, as well as the new Nightshade book Snakeroot, set for publication later this year.
Posted by bobbie killip at 11:57