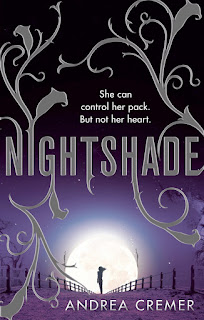 Quote:
“My eyes moved over his face. His chiseled jaw and high cheekbones twisted in agony. Even writhing he was beautiful, muscles clenching and unclenching, revealing his strenght, his body's fight against its impending collapse, rendering his torture sublime. Desire to help him consumed me.
I can't watch him die.”

Goodreads summary:
Calla Tor has always known her destiny: After graduating from the Mountain School, she'll be the mate of sexy alpha wolf Ren Laroche and fight with him, side by side, ruling their pack and guarding sacred sites for the Keepers. But when she violates her masters' laws by saving a beautiful human boy out for a hike, Calla begins to question her fate, her existence, and the very essence of the world she has known. By following her heart, she might lose everything- including her own life. Is forbidden love worth the ultimate sacrifice?

My Review:
Nightshade is pitched as a paranormal romance, a love triangle with werewolves. Don't let that fool you though - it's so much more than that. Cremer has created a complex and intriguing world for her wolves. These aren't your run-of-the-mill werewolves - the Guardians are a race created by magic, loyal warriors of the Keepers, a group of powerful, magic-wielding Old Ones. Protectors of the Haldis Cavern and enemy of the evil Searchers. At least that's what the Guardians have been taught to believe...

Calla Tor is an alpha, destined to be leader of a new pack of wolves charged with the responsibility of protecting Haldis Cavern. At her side will be Ren - Renier Laroche, the boy who Calla has been promised to since birth. But then Calla comes across Shay, alone on the mountain being attacked by a bear, and everything changes.

Cremer eases us into her world, taking just the right amount of time to explain things along the way. She reaches the perfect balance between action, emotion and information, ensuring that once you start reading it is very hard to stop! Calla is the ideal heroine - she's strong, but has a vulnerable side. She's beautiful, but she shies away from it, seeing herself as a warrior rather than a princess. The Keepers have made sure that she has been kept pure, so at seventeen she has never even been kissed. I don't entirely approve of the way so many YA heroines have absolutely no experience with guys until 'the one' comes along, but when it comes to Calla's story it kind of works.

Calla is supported by her pack - her brother and her friends, who follow her in everything and would die for her. Opposite Calla is Ren - hot alpha wolf and Calla's destiny, backed by his own pack. Cremer has created a great supporting cast here, a group of characters who between them cover just about every type of person, making sure we all have someone to root for. Then into the mix comes Shay - the third point in the love triangle which keeps the romance-lovers happy throughout the book. I'm not going to focus on the love triangle too much - I'm not a fan of them on the whole. In twilight I was team Edward all the way - it seemed so obvious - but in Nightshade I'm torn. I can't help finding Ren's strong alpha character sexy, but by the end of the book Shay really comes into his own and you can see why Calla finds him so hard to resist. Cremer has done a great job of creating the storyline and keeping it going - I really felt for Calla all along the way, sharing her confusion and inner turmoil. Her pack is her life, and the union between her and Ren has always been her destiny. She can't change that... can she?

If you're not all about the romance, you might not appreciate Nightshade so much - I've seen a lot of mixed reviews, and many people seem to be disappointed by how much the book centres around the love triangle. Personally, I'm becomming a bit jaded by the whole love triangle thing, but I found Nightshade different enough that it really reeled me in and kept my interest. There's plenty of intrigue and action to keep you going - Cremer's world is fraught with danger, and as Calla begins to discover that her history isn't what she thought it was, you're into the realm of conspiracies, censorship and even a spot of philosophy. The group dynamics between the pack members are a strong feature, and the characterization is of the best quality.

I've already started reading the next book in the series, Wolfsbane - luckily for me the library came up trumps with my order, and I have Bloodrose all lined up and ready to go as well. Anyone thinking of reading Nightshade should make sure they have access to the other two book in the series, because if you have to wait before continuing the story you are going to be screaming with frustration!
Posted by bobbie killip at 12:42