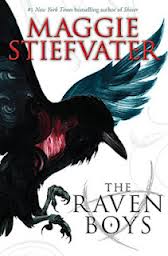 Published by: Scholastic Press
Release date: 18th Sept 2012
Series: Raven Cycle #1
I got it from: Library

Goodreads summary:
“There are only two reasons a non-seer would see a spirit on St. Mark’s Eve,” Neeve said. “Either you’re his true love . . . or you killed him.”

It is freezing in the churchyard, even before the dead arrive.

Every year, Blue Sargent stands next to her clairvoyant mother as the soon-to-be dead walk past. Blue herself never sees them—not until this year, when a boy emerges from the dark and speaks directly to her.

His name is Gansey, and Blue soon discovers that he is a rich student at Aglionby, the local private school. Blue has a policy of staying away from Aglionby boys. Known as Raven Boys, they can only mean trouble.

But Blue is drawn to Gansey, in a way she can’t entirely explain. He has it all—family money, good looks, devoted friends—but he’s looking for much more than that. He is on a quest that has encompassed three other Raven Boys: Adam, the scholarship student who resents all the privilege around him; Ronan, the fierce soul who ranges from anger to despair; and Noah, the taciturn watcher of the four, who notices many things but says very little.

For as long as she can remember, Blue has been warned that she will cause her true love to die. She never thought this would be a problem. But now, as her life becomes caught up in the strange and sinister world of the Raven Boys, she’s not so sure anymore.

My review:
Oh my. I am so in love with Maggie Stiefvater right now. I fell for the Wolves of Mercy Falls trilogy quite some time ago (read my review here), but then I read the Scorpio Races and wasn't convinced by it. For that reason, along with the fact that I'm very wary of faery-based stories, it was a long while before I delved into Lament. Read it, lurved it (review to come soon), and decided I needed to give The Raven Boys a chance... So glad I did. This is Stiefvater at her absolute best - captivating, whimsical, intense and a little bit dangerous. It really has the same feel as the Shiver trilogy - that feeling that you're reading something important. Something big, a legend in the making... a piece of magic.

I'm not going to bother with the whole synopsis thing - the Goodreads summary does all that. Instead I want to tell you about how the book makes me feel. Because I think in some ways that's a lot more important than what the book is about. Sure, the fact that it has ley lines and magic makes it interesting to me, but the fact that it captures my heart and imagination means a lot more. The way it makes me want to fold myself into the pages, to become Blue and to go on a mystical quest with these intriguing and dangerous Raven Boys. The way I get irrationally irritated if anyone dares to interrupt my reading of this book. The way I feel bereft when I come to the end.

There is something lyrical about Stiefvater's writing - I get the feeling that she chooses her words very carefully, whilst at the same time allowing them to pour naturally through her from the ether where stories live. The Raven Boys is full of prophesies, legends and untold truths. It was incredibly refreshing to read a book that's not all about the romance. You might expect, given the tagline "if you kiss your true love, he will die", that the focus would be on finding one's true love and agonising over not kissing him. Nothing could be further from the truth. I should have known, given the complexity of the relationships in Shiver - a simple love story does not belong in Stiefvater's world. Instead, the intelligence of the reader is actually respected. The lives of the characters are not one-dimensional, lust-obsessed and full of teen angst - they are multi-faceted, involved and tangled up with one another. When Blue starts hanging with the Raven Boys, she is drawn quickly into the intimate and delicate weave of their lives. Written in the third person, which is something of a departure for Steifvater, we are gradually introduced to the cast of The Raven Boys - a large and diverse collection of characters, each of them fully-formed and separate from the others. You have to admire the author's talent for creating people that are so real. As I mentioned in my review of Shiver, the devil is in the detail - a tiny gesture here, a semi-concious thought there - these are the things that make her characters come so completely alive.

This is a hard review to write, actually. I can't say much about the story without giving something away, and I could wax lyrical for pages on the beauty of Stiefvater's writing, but there's nothing interesting about reading someone else's hero-worship. Plus, there's only so many times I can use words such as 'complex', 'magical' and 'beautiful' without sounding like an illiterate sap. Please, just read it. If there is even a tiny part of you that is intrigued by the idea of a very real kind of magic, read it. If you want to wake up your imagination, enjoy getting a little spooked, sigh with longing and shout out at the twistiest of twists, read it.