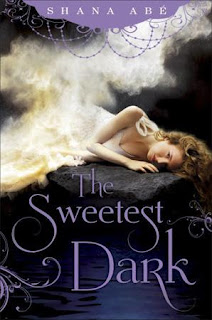 Published by: Bantam
Release date: 9th April 2013
Series: The Sweetest Dark #1
I got it from: NetGalley

Quote:
" With every fiber of my being, I yearned to be normal. To glide through my days at Iverson without incident. But I’d have to face the fact that my life was about to unfold in a very, very different way than I’d ever envisioned. Normal would become forever out of reach. "

Goodreads summary:
Lora Jones has always known that she’s different. On the outside, she appears to be an ordinary sixteen-year-old girl. Yet Lora’s been keeping a heartful of secrets: She hears songs that no one else can hear, dreams vividly of smoke and flight, and lives with a mysterious voice inside her that insists she’s far more than what she seems.

England, 1915. Raised in an orphanage in a rough corner of London, Lora quickly learns to hide her unique abilities and avoid attention. Then, much to her surprise, she is selected as the new charity student at Iverson, an elite boarding school on England’s southern coast. Iverson’s eerie, gothic castle is like nothing Lora has ever seen. And the two boys she meets there will open her eyes and forever change her destiny.

Jesse is the school’s groundskeeper—a beautiful boy who recognizes Lora for who and what she truly is. Armand is a darkly handsome and arrogant aristocrat who harbors a few closely guarded secrets of his own. Both hold the answers to her past. One is the key to her future. And both will aim to win her heart. As danger descends upon Iverson, Lora must harness the powers she’s only just begun to understand, or else lose everything she dearly loves.

My review:
I read The Sweetest Dark not knowing what to expect - I've not come across Shana Abe's books before, but now I'm suffused with the joy of having found a new author to love. If you're a fan of Abe, you will probably have a good idea of what to expect, but I'm writing this review for those of you who haven't had the pleasure yet, who don't yet know what a beautiful and magical world she creates.

I'm not going to say too much about the story - the Goodreads summary above gives away as much as I'm prepared to reveal, because if you don't know the author's previous work you won't know what to expect when Lora's secret is revealed.

Instead, I'm going to focus on Abe's writing, which is wonderful, and the interesting world in which the story is set. We are transported to England during the outbreak of World War I. A time when the aristocracy still held sway, a time of romance and horror; when the rich are very rich and the poor are very poor. Abe's poetic prose conjurs up evocative visions of her settings - a London orphanage, dirty and hard. A school for privileged girls near the south coast, full of rich bitches. A whimsical mansion, imposing but full of oddities. Our heroine is the narrator of her own story, and she tells it with such feeling that you can't help get caught up in it.

The Sweetest Dark reads like an old film - slow at first, but that's no bad thing. We get to know our heroine, and are treated to glimpses of the two male leads as the story steadily unfolds. Building up gradually, drawing us ever deeper as it goes, preparing us for the exciting culmination, when the plot erupts with volcanic vigour, treating us to a tragic and breathtaking finale. Abe's writing is perfect for the time setting - being set in the past gives credence to the fairytale-esque tale that she weaves. The differences between that time and this allow for a style that is hauntingly beautiful and enchantingly evocative, without being overbearing or twee. Abe's descriptions of the people, surroundings and emotions are perfectly in-line with Lora's narrative - we are shown what Lora sees, focusing on the details she notices and the way she feels about what is happening around her.

The summary hints at a love triangle, but I was pleased to find that it isn't one of those annoying plot devices, there for the sake of it, but something else entirely. I won't give anything away, except to say that I love Lora even more for the choice she makes, and I cried for her at the end. The supernatural element to the story is intriguing and beautiful. As I've mentioned, if you're a fan of Abe you will know what to expect, but if you don't know what's coming, don't be impatient - learn about Lora as she learns about herself.

I will definitely be adding Abe's other books to my 'to read' list, and I'm very happy that NetGalley has given me the opportunity to read both this book and its follow-up, The Deepest Night. I'll also be adding both books to my paperback wishlist, because as much as I appreciate getting to read the digital versions early, when a book affects me as much as this one did, I need to be able to hold it in my hand, feel the paper, smell the ink and ruffle the pages.
Posted by bobbie killip at 09:46