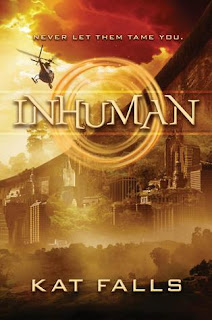 Published by: Scholastic
Release date: 24th September 2013
Series: Fetch #1
I got it from: Netgalley
Goodreads summary:
In a world ravaged by mutation, a teenage girl must travel into the forbidden Savage Zone to recover lost artifacts or her father’s life is forfeit.

America has been ravaged by a war that has left the eastern half of the country riddled with mutation. Many of the people there exhibit varying degrees of animal traits. Even the plantlife has gone feral.

Crossing from west to east is supposed to be forbidden, but sometimes it’s necessary. Some enter the Savage Zone to provide humanitarian relief. Sixteen-year-old Lane’s father goes there to retrieve lost artifacts—he is a Fetch. It’s a dangerous life, but rewarding—until he’s caught.

Desperate to save her father, Lane agrees to complete his latest job. That means leaving behind her life of comfort and risking life and limb—and her very DNA—in the Savage Zone. But she’s not alone. In order to complete her objective, Lane strikes a deal with handsome, roguish Rafe. In exchange for his help as a guide, Lane is supposed to sneak him back west. But though Rafe doesn’t exhibit any signs of “manimal” mutation, he’s hardly civilized . . . and he may not be trustworthy.

My review:
I loved this book. Straight-out loved it. I'm not a huge dystopia fan, and there were a few flaws if we're going to get technical, but inhuman had that certain something - that indefinable quality that made me love it, despite all the reasons why I shouldn't!

There's a love triangle which has the feeling at the start that it's been shoehorned in somewhat, but by the end it somehow works on a lot of levels. There's the manimals (part human, part animal) - there is no way a virus should be able to alter a person's physiognomy to that level, but I love the idea of them so much I'll let it slide. It's no more incredible than vampires, werewolves or angels, so why not?

There were predicable elements, but they were off-set by a hundred little twists and turns that I didn't see coming, and I revelled in them. Falls' writing is seriously addictive. I felt what Lane felt, I saw what she saw. Lane herself is not the most original character ever - the girl from the soft side forced to survive in the wild - but I loved her all the same. Likewise for Rafe and Everson - hot, bad guy with a secret heart of gold and hot military guy who's just a misunderstood softie - neither of them particularly original, but each of them lovable in their own way. And for the record, in case you were wondering, I'm team Rafe all the way.

Taken to pieces, the only really exceptional thing about Inhuman is the part that gives it its name - those ferals, hybrids and manimals are what holds it all together and makes it special. That, and Falls' addictive, fast-paced and empathetic writing. The dialogue is great, the descriptions make me feel like I'm there, and the world building is out of this world! I can see this becoming a very successful series - it's different, fun and very readable. I know one thing for sure, I can't wait to read the next installment.
Posted by bobbie killip at 13:49