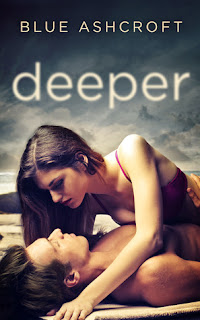 It’s a promise she made the day her boyfriend died in a water park accident, one she still blames herself for. Now she’s a senior lifeguard in a new town with a new pool and she’s just going to keep her head down and everyone safe.

Until a mysterious guy follows her into the waves at the pre-season bonfire and kisses her senseless. It’s just one mistake, and Rain is determined to put it behind her, until the dark haired, blue eyed hottie turns out to be her new co-supervisor Knight Mcallister.

Knight is hot, tatted, and carrying baggage of his own. He’s not happy about having Rain for a co-supervisor, and he’s even less happy about his attraction to her.

But between lifeguard drama, hot underwater kisses, and a growing attraction between them that can’t be stopped, Knight and Rain are being pulled deeper into their pasts, and realizing that sometimes too much broken can make a relationship impossible.

Then again sometimes it’s the broken parts of us that fit together best.

My review
Deeper is exactly my kind of NA book. It has everything I need and want from a book - girl and boy point of view, two strong characters each with their own secrets and problems, emotions that feel real and a good ending.

Rain and Knight are both great NA characters. They're both damaged by events in the past, and as usual you wonder for a while if two broken people can work well together. Sparks fly between these two, you can really feel the attraction they have for one another. It's in the way Rain gets butterflies and itches to touch him when she's trying to listen to him work out the schedule, and it's in the way he feels like he's woken up after years of walking around in a coma.

Rain is strong and determined. At just 19 she's young to be working as a supervisor lifeguard at a waterpark, but she's professional, good at her job and doesn't take any crap. Knight is cocky and confident most of the time, but now and again his facade slips and we spy the pain he's holding in underneath.

Deeper is the perfect summer holiday read in my mind. The setting, a waterpark, makes a nice change from college, and lets your imagination run riot thinking of all those sexy young things in swimsuits! Although there are emotional issues, it's not a heavy read. Ashcroft's writing makes it addictive, I didn't want to put it down once I got started.
Posted by bobbie killip at 09:29