Woop Woop! I have a giveaway for you! The lovely Cassandra Giovanni has offered to give away a copy of her brilliant book Love Exactly, and she's even given us a playlist for the book to enjoy! First things first though, check out my review of the book... 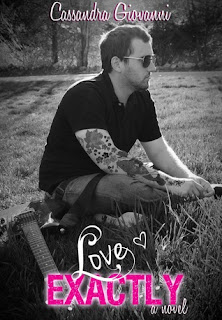 Emma Walker was a writer who'd lost herself to someone else's anger--who had given up on ever feeling like herself again.
Evan Levesque was a rock-god--the one all the woman wanted, but he'd never gotten used to the loneliness between the stage and real life.
With just one cup of coffee they'll begin a journey of self-discovery at each others sides, but can Emma handle Evan's fame while dealing with her own demons? Emma's checkered personal past, a bad relationship that haunts the edges of her memories, threatens to make everything implode on them when Evan takes matters into his own hands.
Sticks and stones may break my bones, but your words...they'll destroy my soul--Can Emma handle being put back together and facing who she's become because of it?

Love Exactly was a joy to read. There's not as much heartache as there is in a lot of New Adult novels, and although that can make for a moving read, I don't think any less of LE for the lack of it. What LE does have is an overwhelming sense of rightness throughout - the way the relationship goes, the ups and downs, the realness of it all just feel so right.

Emma is honest and beautiful, inside and out. She's braver than she thinks she is, though it takes her a while to finally realise it. She's been through hell and back in the past, and it's affected her, as it would anyone. When she meets Evan she's very fragile, and the way he needs her, as much as she needs him, helps her to heal and grow.

Evan is just plain gorgeous. He's amazing in all sorts of ways. Apart from the purely physical hotness, he's deeply kind, romantic, talented and very lovely. He's almost too perfect. Even his flaws, such as they are, don't really seem like flaws when taken in context.

Evan is famous. He's a rock star. But he's also a person, and that's what we get to see the most. Emma grounds him, she lets him be himself, demands it even. Not that he's given to prima donna-esque outbreaks. He's 30 when we meet him - old enough to have worked his way through the bad-boy phase and come out the other side relatively unscathed. I would like to read Evan's side of the story, Beautiful Disaster/Walking Disaster style, because I get the feeling there's a lot more to him than we ever get to see.

If you've been reading my reviews you'll know how picky I am about endings, and I'm pleased to report that this is a really good one. So many books go on too far beyond the point at which they could and should stop, but Love Exactly ends in exactly the right place. Cassandra gets it spot-on, not just at the end, but all the way through. Her writing is full of feeling and addictive to read, her characters are genuinely likeable and everything about this book makes me want to read more of her work.

Music plays a huge part in Love Exactly - Evan being a rock star and all - so I asked Cassandra to give us her playlist for the novel. Here it is, lots of Maroon 5 on there!

And now... The Giveaway!

a Rafflecopter giveaway
Posted by bobbie killip at 11:25