Review: The Genesis by K.L. Kerr 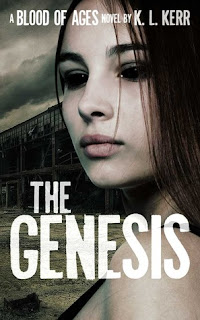 Published by: Penrefe Publications
Release date: 12th September 2013
Series: Blood of Ages
I got it from: Netgalley
Goodreads summary:
An Uncontrollable Power. An Unstoppable Corporation. A Vampire God.

The vampires of Dayson city are preparing for war. Having lived in constant fear of the Archway Corporation for decades, desperation has forced them into action. Their solution is to bring the First vampire, Alistair, back from the dead, a warrior famed for eradicating entire armies in the name of his kind.

For fledgling vampire Catrina Malinka, the fabled return of some unknown deity falls low on her list of concerns. Between fending off strangers trying to kill her in her dreams and trying to rein in an uncontrollable power that no one else even understands let alone shares, Catrina is forced to fight her assumed role in the war against Archway, which threatens to send her down a path she doesn't want to travel.

The first book in The Blood of Ages series, "The Genesis" is an urban fantasy about the inescapable nature of Fate and the corruption of power.

My review:
It was really good to read a vampire book about the actual vampires. All too often, vampire books are actually about a human, and their relationship with a vampire. In The Genesis though, we step into the life of a newly-bitten vampire. As we follow Catrina, we learn about the clan she is now affiliated to, and about how it feels to get used to the strange new powers she possesses.

Kerr does a great job of describing the new feelings that come with being turned into a vampire. Her vamps have a heart-beat, which is unusual but makes sense, but they stick with the traditional daylight burns, drinking human blood (thought not necessarily to the death), etc. Naturally, where there are vampires there are people who hunt them, so we are caught up in a battle between the hunters and the vamps. There are some good uses of technology, and I liked the fact that the clan has an infirmary because although the vamps can heal quickly, it's not instant.

I don't think I'm giving away too much here - it's all pretty inconsequential stuff - I just want you to get a feel for the world Kerr has built. It's done well - you can tell a lot of thought has gone into it, and it feels solid. Catrina takes to her new life pretty well, all things considered, but when you look at her old life it's easy to see why. She comes from an unusual background, and life as a soldier vampire isn't actually that different to her previous life as a human assassin. Everything ties together nicely, with the feel of a book well-developed, although a little more background to help us get to know Catrina personally wouldn't go amiss.

There's a bit of an Underworld feel to the whole 'bring the ancient vampire back to life and he will lead us to victory' aspect of the story, but not in a rip-off way. I'm not entirely sure how much I like the actual Genesis part of the book personally though. It's a new and interesting take on the vampire origin myth, and it lies well in the storyline, but there's just something about it all that didn't appeal to me. I think it might be the fact that I'm a sucker for romance, and there's a severe lack of it here. I'm sure some of you will love that - a vampire book that's not all about the sex or teen angst? A rare thing indeed.
Posted by bobbie killip at 11:40