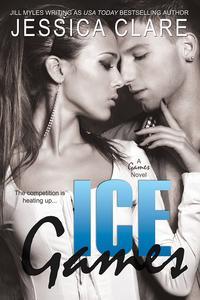 Published by: Jill Myles
Release date: 29th July 2013
Series: Games #3
I got it from: ARC via GR New Adult Book Club Read & Review
Goodreads summary:
Zara Pritchard is a has-been. Once an Olympic darling, she's been reduced to skating in a dinosaur costume and giving lessons at the local mall...which is why she's excited when she's offered a chance to sub on a TV show, Ice Dancing with the Stars. If she wins the show, this could be the break she needs.

There's just one problem - her partner.

But when wash-out meets flame-out, sparks fly and tempers flare. And Ty and Zara start to realize that maybe this partnership might be just as steamy off the ice as on it...

My review:
A fun and flirty holiday read, exactly the kind of NA novel I like for a bit of light reading. There's no angst to be found here, no harsh reminders of the real world. Zara and Ty both have incidents in their past that they're not proud of, that have wrecked their careers, but for the reader it's just a little glitch with a great outcome - bringing the pair together.

Zara is tiny but feisty. She may be small but she's strong in body and heart. And when you hear Ty's words about her you'll see just how sexy she is. With the body and agility of a figure skater, a wild streak a mile wide and a determination to win, there's nothing not to love about this girl.

Ty is a fighter, and you can't deny that there's something sexy about that - his body, his strength and his toughness. But it's what's inside that really counts. He may have bitten a chunk out of a guy's nose in the ring, but with Zara he's as sweet as can be - at least he is after the initial clash of strong personalities. The little skater has got under his skin, and he'll do anything to make her happy - except wear sequins!

These two have chemistry from the moment they meet, and although they string us along for a while, we're treated to a doozy of a sex scene in the end! I don't feel bad about revealing that, as I reckon it's pretty much a given from the moment he puts his hands on her, and it gives you something to look forward to! A short book you can enjoy in an afternoon if you fancy a bit of fun and romance. It's part of a series but works fine as a standalone read.
Posted by bobbie killip at 08:00