UKYA review: Popping the Cherry by Aurelia B Rowl 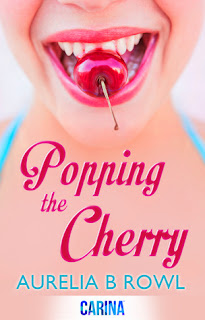 Published by: Carina
Release date: 19th September 2013
Series: n/a
I got it from: NetGalley
Goodreads summary:
You only get one first time . . .

From driving tests to relationships, Valentina Bell thinks she’s a failure, with a big fat capital F. At this rate, she’s certain she’ll be a virgin for ever. So Lena’s friends plan Operation: Popping the Cherry to help her find the perfect man first time.

Yet somehow disastrous dates with bad-boy musicians and fabulous evenings with secretly in-the-closet guys aren’t quite working out how Lena planned.

Soon Lena’s avoiding Operation: Popping the Cherry to spend time with comforting, aloof Jake, her best friend’s older brother, who doesn’t make her feel self-conscious about still clinging to her V card. But could Jake show Lena that sometimes what you’re looking for most is right by your side?

A FOREVER for the twenty-first century

My review:
Ahh, this book was exactly what I needed. After trawling through a bunch of difficult fantasy novels, I was more than ready for this easy-to-read, light-hearted bit of contemporary romance. It was so nice reading a Brit book too - the voice is so different to a US one, but I often forget just how much difference it makes, what with the market being flooded with US fiction. As I'm taking part in the British Books Challenge this year though, I'm doing my best to read and plug as many good UKYA books as I can. Thankfully, books like Popping the Cherry make my job easy - as soon as I read it, I wanted to tell you all about it.

Lena is a great MC for starters. She's so blessedly normal. She's at college studying for her A-levels, but she doesn't really know what she wants to do. She has friends, but she's not uber-popular. She's not geeky, she's not beautiful, she doesn't have that much self-confidence but she's not a complete wall-flower. She's a virgin, which is kind of the point of the book, but she's not a prude. She has a great voice, and I loved reading her story.

Lucky Lena is also surrounded by a bevy of brilliant characters. Her group of friends are spot-on - I can just imagine those girls at college together, Rowl brings them all to life so well. Even the peripheral characters - the parents and other students - are excellently done. Some authors don't seem to realise the importance of secondary characters, but Rowl clearly does, and she does her job with aplomb. And then there's Jake. Ah, Jake. He's a builder by trade, he's 21, he's Lena's best friend Gemma's brother. There are so many reasons why he shouldn't work for Lena, somehow he does. He's not just a builder, he's a director of his father's company, and he's got vision. At that age, a few years difference is definitely a good thing in my mind - girls mature so much quicker than boys, that at 17, college boys are best avoided. The thorny issue of Gemma is more problematic. But is all this relevant anyway? Can Jake really be a contender for Lena's affections? He's definitely not on her cherry-popping list, so he's off-limits, right?

Rowl does breathless romance very well. There were so many moments in this book that had my stomach clenching, butterflies tripping around my insides. It really brought to life those heart-stoppingly awkward but beautiful moments when two people start to realise that there is something more between them than friendship. It's not plain-sailing by any means. Lena runs into more than her fair share of trouble, but luckily there's a certain someone there ready to act as knight-in-shining-armour. By the time I got to the end I was fairly screaming at the book to make it happen already, but that's all part of the fun. The ending itself was a little soppy, but in a nice way.

A perfect blend of teen issues and fun romance, Popping the Cherry is exactly my kind of book, and I hope it is yours too.
Posted by bobbie killip at 15:33