Review: The Testing by Joelle Charbonneau 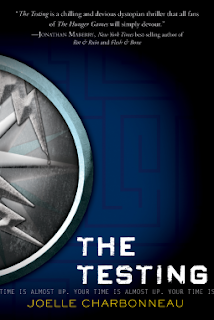 Published by: Houghton Mifflin Books for Children
Release date: 4th June 2013
Series: The Testing #1
I got it from: NetGalley

Goodreads summary:
Keep your friends close and your enemies closer. Isn’t that what they say? But how close is too close when they may be one in the same?

The Seven Stages War left much of the planet a charred wasteland. The future belongs to the next generation’s chosen few who must rebuild it. But to enter this elite group, candidates must first pass The Testing—their one chance at a college education and a rewarding career.

Cia Vale is honored to be chosen as a Testing candidate; eager to prove her worthiness as a University student and future leader of the United Commonwealth. But on the eve of her departure, her father’s advice hints at a darker side to her upcoming studies--trust no one.

But surely she can trust Tomas, her handsome childhood friend who offers an alliance? Tomas, who seems to care more about her with the passing of every grueling (and deadly) day of the Testing. To survive, Cia must choose: love without truth or life without trust.

My review:
I don't really like it when a book is marketed as 'the next...(insert popular title here)'. The Testing is being pushed as the next Hunger Games. Yes, there are close parallels between the books, but then The Hunger Games wasn't the most original idea in the world anyway. There are only so many ideas out there, but there are many different takes on the same idea, and that's where it gets interesting. Just look at the plethora of monster books. Vampires, werewolves, zombies... whatever costume you put on it, it's still a monster. When it comes to the subject of dystopia, again there's lots of ways to dress it up - a whole host of different nations, different outcomes from nuclear war or whatever disaster has occurred to make the future so inhospitable.

In The Testing, war has left much of the world inhospitable, and humankind are slowly rebuilding and repopulating in the United Commonwealth (aka the US). Cia is a smart student from a good family but they live in a very small settlement. Her father is one of the few who went to university - meaning that he passed the testing. When Cia is chosen as a candidate, her father can't tell her anything about the testing - because he can't remember it. All students who pass the Testing have their memories of the process removed. But Cia's father has nightmares, and he has reason to believe that they are more than just bad dreams.

If we're going with the Hunger Games comparison, I'd say The Testing starts off feeling very much like it, but that doesn't last for long. The trials that Cia and her fellow candidates undertake are very different, although there is more than a little violence and bloodshed. Cia herself is a great heroine - I was really taken with her and she made the book very easy to read. She is just the right combination of smart, nice, strong and vulnerable - a mixture that makes for a very real-feeling character. Thomas is unfortunately not quite as good - I think the fact that we don't really get a proper feel for him is indicative of Cia's fight with herself over whether to trust him or not, but she's supposed to be falling in love with him and that doesn't really come across.

I'm not quite sure why the United Commonwealth require such rigorous testing. That's my only gripe with this book, and I've got a feeling that it may be explained at some point in the next book. We hear the story in the first person from Cia. If she doesn't know why the testing is so harsh, then neither do we. But I think she might learn more in the future, and I want to join her. I'm not really a massive fan of dystopia, but I really enjoyed reading The Testing and I now need to read Divergent to see the comparison that lots of people have made!

Download a free prequel, which includes the first three chapters (they're short chapters!) of The Testing and find out more at The Testing Trilogy website.