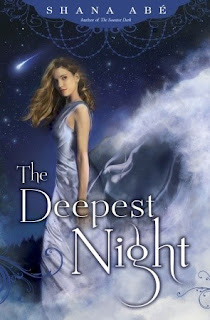 Published by: Bantam
Release date: 13th August 2013
Series: The Sweetest Dark #2
I got it from: NetGalley

Goodreads summary:
It’s 1915, and sixteen-year-old Lora Jones is finishing up her first year as a charity student at Iverson, a prestigious, gothic boarding school on England’s southern coast. While she’s always felt different from everyone around her, now she finally knows why: She is a drákon, a rare, enchanted being with astonishing magical abilities.

As war hits Britain’s shores, and Lora reels from an unimaginable loss, she finds that her powers come with grave and dangerous responsibilities. At the request of Armand Louis, the darkly mysterious boy whose father owns Iverson, Lora will spend her summer at his lavish estate. To help the war effort—and to keep Lora by his side—Armand turns his home into a military hospital, where Lora will serve as a nurse. For Armand is inescapably drawn to her—bound to her by heart-deep secrets and a supernatural connection that runs thicker than blood.

Yet while Lora tries to sort out her own feelings toward Armand, fate offers an unexpected surprise. Lora discovers there is another drákon, a prisoner of war being held in Germany. And that only she, with her newly honed Gifts, will be able to rescue him.

With Armand, Lora will cross enemy lines on an incredible mission—one that could bond her to Armand forever, or irrevocably tear them apart.

Beautifully written, deeply romantic, and filled with daring adventure and magic, The Deepest Night is a mesmerizing novel of the enduring pull of destiny, and the eternal strength of love.

My review:
I was totally captivated by this book. I adored The Sweetest Dark (you can read me gushing over it here), and The Deepest Night just hooked me even tighter. I flew through the book like a dragon flying through the amethyst night, never stopping, glorying in the darkness.

Lora is possibly my favourite heroine ever. She is exactly the right combination of gutsy, sweetness, bravery and empathy. She is growing into her powers and herself. In The Sweetest Dark, Jesse taught her so much, and now in the Deepest Night she is learning even more. At this point I should probably warn you that if you haven't yet read The Sweetest Dark, you need to go away and read it before continuing with this review, because I'm likely to drop a spoiler or two. I will try not to, but it's hard to talk about a second book without mentioning the outcome of the first!

Abe weaves a wonderful world. It's war time, and the gravitas that this lends to the story is very important. By placing the book in recent history, Abe creates the feeling of a fairytale combined with a memoir. The events of the war are very much a part of the book, though they are somewhat abstract. We're not bogged down with details - it's enough to know about the zeppelins and U-boats that pose an ever-present invisible threat to Iverson, and that in order to save Aubrey Lora and Mandy must cross over enemy lines to a prison camp in East Prussia. The restrictions society of the time places on the way men and women can interact with one another makes the growing relationship between Lora and Armand so much sweeter and more poignant.

Mandy, aside from his name, is growing on me more and more. Jesse in The Sweetest Dark was the epitome of a first love - he brought Lora out of herself - sheltered her when she needed it yet urged her forward when it was required. He taught her about magic, about her other nature, and about love. But now Lora is grieving, and Armand is the one who is there for her. In facing up to the feelings he has for Lora, and the beast that he may yet become, he is growing up. He is transforming form a spoilt boy, crashing off the rails for the sake of it, and taking responsibility for not just his own actions but others' too. His devotion to Lora, even knowing that her heart belongs to Jesse, is hard to resist. And don't worry - he hasn't lost his cheeky side! I think the way Abe wrote Jesse and Armand in the first book was genius - we love Jesse but we can't help but siding with team Armand, which is ideal given the events at the end of book one and the way things progress in book two.

While The Sweetest Dark started slowly, easing us into the story and setting up the background, The Deepest Night doesn't need that so it's a lot faster paced. Events move quickly in a nation at war, and the characters have to keep up with them. Part adventure, part fairytale, part love story; The Deepest Night has everything you could ever want from a book and more. Abe's writing is just glorious. Everything about her books is so enjoyable. The way she writes makes me want to just dive in and live in her world. Her descriptions, the relationships between the characters, and the way we see deep into the main characters' psyches, makes for a truly incredible reading experience. I have no idea when the third book is due for publication, but given that this one isn't out until August I'd say it's going to be a while. I can only hope that I get a chance to read it early on NetGalley, because I really can't wait!
Posted by bobbie killip at 10:01