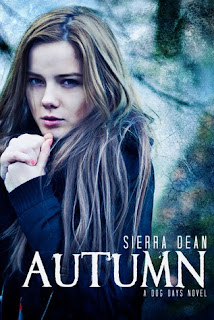 As if being a high school senior in a small Texas town wasn’t hard enough, Cooper has bigger things to worry about than who he’ll take to prom and whether or not the Poisonfoot Padres will win homecoming. He has less than a year before his eighteenth birthday, when a curse placed on his family will doom him to live in coyote form forever.

The last thing he needs to complicate his already messed-up life is a girl, but fate has other plans in mind for him when it brings Eloise “Lou” Whittaker to Poisonfoot. She’s grouchy, sarcastic and has no love for her new Texas home, but she might be exactly the right person to help Cooper break the curse.

The clock is ticking, and Cooper will have to decide if he’s willing to let Lou in on his dirty little secret before it’s too late.

My review:
I don't like to compare books to other books all the time - they all should be seen in their own light - but I just have to mention that Autumn made me think of a mash-up between Twilight and Shiver my Maggie Stiefvater. To me, this is pretty high praise. Say what you like about Twilight, it's damned successful. And Ms Stiefvater is my author hero. So, Autumn is more than good, even if it does remind me of other books.

It's only the opening scenes of the book that are a bit Twilighty - Lou moves to a small town far away from everything she knows, starts a new school and becomes fascinated by the boy who everyone tells her to stay away from. So I found the beginning a little weak, like it needed to define itself better, but it didn't take long after that to get me hooked and speeding through the pages.

I liked Lou. She has a couple of annoying teenagerish lines, but seeing as she's a teenager I'm going to forgive her that. She's snarky and funny though, which I love about her, and she's not all hung up on appearance. I thought she would be more wrapped up in her grief as her father died so recently, but we all react differently and she did have time to come to terms with it as he was ill for a while. She has diabetes, which gives her an interesting edge - I'm not saying that you need to give a character a health issue to make them interesting, just that it's a condition that rules your life, and can change a person, make them more cautious and wary. Cooper makes her feel different though - braver and wilder.

Cooper is adorable. He's a little self-absorbed at times, but considering his fate I'll let him off. And he does realise it himself eventually. He progresses well as a character - from his detached description of his life as an outcast, to a boy who decides to be selfish and let the cute girl who's trying to get to know him get closer, to the boy who finally decides it's time to try and do something about the curse that plagues him.

What I like best about Autumn is the way Dean plays the supernatural card. Ghosts, dreams, curses and magic are all introduced in such a way that it seems perfectly believable. I don't know how she does it, it's just really well written, and woven into the story in such a way that the events unfold naturally.

My main gripe with Autumn is that it's too short and has a hell of a cliff-hanger ending. I can't wait to read Winter now!
Posted by bobbie killip at 09:44