The universe likes synchonicity. You wake up with a song in your head, and it's the first thing you hear on the radio. Something bothersome happens to you one day, and that night the same thing happens to a character in your favourite TV show. You request a random book on Netgalley, and the next day a book you forgot you ordered from the library arrives, and it turns out they're both about the same thing. And neither of them are American. And it's not even a vague thing, like romance or vampires - it's way more niche than that, because really, how many books about dorks are there out there? So it happens that I have both Adorkable by Sarra Manning, and Life in Outer Space by Melissa Keil in my possession. So I figured I should do some kind of comparison review, or possibly just two reviews in one post. I'll start writing and see what occurs... 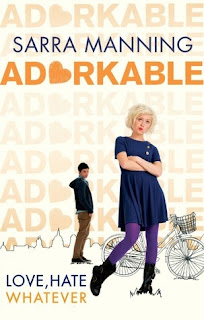 Goodreads says:
Jeane Smith's a blogger, a dreamer, a jumble sale queen, CEO of her own lifestyle brand, and has half a million followers on Twitter. Michael Lee's a star of school, stage, and playing field. A golden boy in a Jack Wills hoodie. They have nothing in common but a pair of cheating exes. So why can't they stop making out? This novel is about an unlikely relationship, but it's also about roller derby, dogs on skateboards, dogs on surfboards, dogs doing any form of extreme sport, old skool hip hop, riding your bike downhill really fast, riot grrrl, those boys you want to kiss but punch in the face at the same time, dyeing your hair ridiculous colors just because you can, stitch 'n' bitch, the songs that make you dance, the songs that make you cry, being a bad ass, cake, love, death, and everything in between.

My review:
I read Adorkable first because I'm in the midst of a love affair with Sarra Manning (see my review of Let's Get Lost), and I couldn't wait. I advise reading Guitar Girl before Adorkable, not because it's necessary, but because you get to see a character or two further along the road and it's nice to catch up with them again.

I loved Adorkable. I loved Jeane, and I especially loved Michael. I think I might be a bit of a dork myself.

Most young dorks keep quiet about it. They feel different, separated from the 'in' crowd and often alone. Jeane is a different breed of dork though - dork and proud! She stands up for dorks the world over. Her blog and twitter feed offers friendship and hope to lonely dorks everywhere. She is wise beyond her years, speaking out about politics, the environment, fashion and cute puppies, tracking and announcing trends before anyone else has noticed them. She lives like an emancipated minor, alone since her sister got a residency in America, so she spends the time when she's not doing her A-levels working on her brand, watching videos of cute dogs and training her boyfriend to be who she wants him to be. She is still a 17 year-old girl though, so her flat is a pigsty and she lives on Haribos and coffee.

Michael has a good home life. His parents love one another and him, they encourage him in everything he does, and he is perfectly happy. He is also perfectly perfect in just about every way. He is popular, clever, sporty and hot, and going out with the lovely Scarlett. But all is not well in that relationship - Scarlett is more interested in Jeane's boyfriend Barney than she is in her own boyfriend. So, we are left with a pretty conundrum. Michael is aware of Scarlett's straying eyes, but when he tries to do the decent thing and let Jeane know he ends up with a face full of verbal abuse. This sets the tone for the not-relationship between these two. Every time they try to talk, they end up in a shouting match. Jeane is the first person not to accept Michael's perfection, and he is the first person to try and get beyond her prickly exterior. All that negative energy has to go somewhere though, and somehow they end up kissing.

There are so many things to love about Adorkable. There's the teenagers who, for the most part, actually act and talk like teenagers. There's the fact that Jeane is not pretty, or even secretly attractive in any way, yet Michael is still drawn to her. There are the brilliant arguments and undeniable chemistry between Michael and Jeane, which is, quite frankly, making both their lives an awkward sort of hell.  There is the fact that Michael is mixed-race gorgeous, because there are not enough mixed-race characters out there. There are the little pockets of sadness and honesty which make this story rise above the usual cute contemporary teen life. There are all manner of references to life as a teen in the UK, which I can actually get and identify with because I'm a Brit reading a brilliant Brit book, and that doesn't happen often!

It's funny and sweet and all of those cutesy, awkward things, and it's heart-rending and big and real. J'adork! 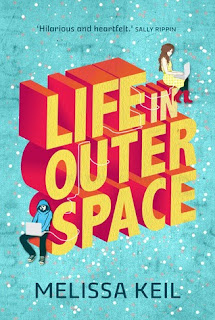 Goodreads says:
Sam Kinnison is a geek, and he’s totally fine with that. He has his horror movies, his nerdy friends, World of Warcraft – and until Princess Leia turns up in his bedroom, he doesn’t have to worry about girls.

Then Sam meets Camilla. She’s beautiful, friendly and completely irrelevant to his life. Sam is determined to ignore her, except that Camilla has a life of her own – and she’s decided that he’s going to be part of it.

Sam believes that everything he needs to know he can learn from the movies ... but now it looks like he’s been watching the wrong ones.

My review:
When I started reading this, I thought Sam and his little band of misfits were the dorks. And they are, but then I realised that they're not the only ones - Camilla is another dork queen. Sam is actually a geek, but I think he's a dork too. I need to sort out my terminology - dork, geek, nerd - who can give me proper definitions? Anyway, so there's Sam and his friends. They spend most of their time avoiding Justin Zigoni and the A-list kids, who have a habit of using Sam & pals for fun when they're bored. Then Camilla turns up. She's not like anyone else Sam has ever known. She has the power to reverse the universe and make things different.

Camilla is uber-cool. Her dad is huge in the music business, she's lived all over the place, she's met tons of famous people, been to awards ceremonies and she has an English accent. Camilla wears whatever she feel like wearing, regardless of fashion. She doesn't get ridiculed for it, she gets revered. She's the kind of girl who can join the chess club, the volleyball team and the spring dance committee. Somehow she crosses the divide between the geeks, the dorks and the masses. She is guaranteed a position at the top of the school, being fawned over by a posse of acolytes. So why is she insisting on hanging out with Sam? Because she plays WoW, and while she's gotten used to starting over at new places and hanging out with whoever will have her, Sam and his friends are the ones she actually wants to talk to.

Life in Outer Space is funny. Sam's observances are hilarious as well as sweet and awkward. It's unusual to read a book solely told from the boy's point of view, but Sam is a great boy to read. He's at that oh-so-awkward stage in life - sweet 16 and never been kissed, but he's such a shy dork that he doesn't see his own potential. Just the fact that Camilla appears to want to be friends with him is astounding enough - the thought of anything more than friends is so far beyond his frame of reference that he doesn't even consider it.

Littered with film references, LIOS is such an entertaining read. It's not particularly original as stories go, but it's done really well and is so enjoyable. It's a chunk of a normal boy's life. His best friend is being weird and secretive, his parents may well be splitting up, his screenplay isn't working, and this amazing girl is somehow insinuating herself into his life. It's fun, kooky, sweet, endearing and adorable. Oh, and it's Australian, which is another example of that synchronicity, because I rarely get Aussie books to read, and I just finished, loved and reviewed Saving Wishes by G J Walker-Smith.
Posted by bobbie killip at 09:39