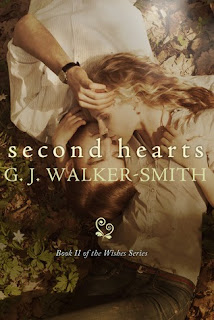 Published by: G. J. Walker-Smith
Release date: 4th April 2013
Series: Wishes Series #2
I got it from: ARC from author
Goodreads summary:
Charli Blake's high tolerance for risk doesn't always work in her favour.
After a year of living out her dream of travelling the world, the sunny West African village of Kaimte would be her last stop.
She's bound for New York, in search of the boy she'd let go of long ago.
For Charli, nothing has changed. She's travelled thousands of miles but hasn't moved an inch. Adam Décarie still means everything to her.
But reality soon hits hard.
For Adam, everything has changed.
Memories of the best love she's ever known is all she has left, until Charli makes a shocking discovery. None of it had ever been real in the first place.

My review:
Oh, boy. Someone please tell me that the next book is out very soon, because I need it!

I was totally hooked by the end of Saving Wishes (see my review), and now I've been sucked in even further. Second Hearts has a different kind of feel to it, but I expected that. Saving Wishes was about the magical beginning of a relationship, while Second Hearts is about what happens next. There are still hints of magic here and there - when Charli arrives in New York she's full of hope and her usual impulsive self. Fate isn't going to let her have it easy though, and it's not too long before she starts to lose sight of La La land.

Oh no! Charli can't lose it. La La land is my favourite place to be. I adore Charli's tales of random fairies and nonsensical folk-lore. But when everything you believed has been torn apart and you're in a strange city, it's difficult to maintain your optimism. I feel like I'm speaking in riddles a little here, but I'm loathe to give anything away. You have to want to read it yourself.

Then there's that moment. That part in the book where everything is as happy as can be, and you just want things to stay like that forever. Unfortunately, at this point there's still a couple of hundred pages to go, and you now deep down that it's not going to be plain-sailing.

In a way, what happens is an echo of the story of Saving Wishes, but it's on Adam's territory this time and that makes a big difference. Can he make Charli want to stay, or can she make him want to leave with her? It seems cruel of fate to bind two people so tightly when they have such different dreams and goals. Are either of them weak enough to give in? Weak, I hear you ask? Is it weakness to give up your dreams to be with the one you love? Yes it is, because no matter how deeply in love you are, if you're not where you want to be, doing what you want to do, you're never going to be completely happy and that can turn love sour.

I fell in love with Charli all over again. She can be evil, bolshy and whimsical, and she drives most people nuts, but she's all kinds of amazing. We get to see a different side of Adam too, one that I'm not loving, but one that's more realistic. When Adam met Charli, he was on holiday - from himself as well as his life. Seeing him on home turf, back in his own habitat, of course he's going to be different. Some other great characters are introduced too, to replace the ones Charli left behind in Tasmania. Adam's brother Ryan has to be my favourite. He's the archetypal man-whore with a secret romantic heart. I would love to see a spin-off of his story. Fiona, Adam and Ryan's mother, is another great character. She's so aloof and proper most of the time, but then she lets go occasionally surprising bitchiness! Even dim Whit is an interesting addition to the cast.

If you haven't read Saving Wishes, I implore you to go and do so. If you have, what are you waiting for? Get Second Hearts right now and prepare yourself - there will be tears, and you will be mad at Walker-Smith's audacity in leaving us on our knees, begging for more!
Posted by bobbie killip at 08:00