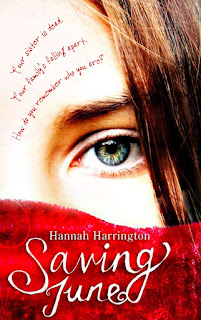 I'm usually drawn more to the supernatural side of teen fiction, but now and again something a little more real draws me in. Saving June appealed for some reason I can't define - it's a road-trip story, a coming-of-age yarn and a poignant tale of loss and growth all rolled into one.

I'll warn you now - it's a powerful read, and one that will make you cry. Our protagonist, Harper, is sixteen and her sister has just commited suicide. You can't pick up a book with that premise and not expect there not to be any raw, weepy moments. Having said that though, what shines through the strongest is Harper's amazing strength. This is not a sad story. Yes, it has scenes that will bring you to tears, but not for the reasons you's expect.

When I read a book that features such a massive loss in someone's life, I can't help but wonder if the author has had any experience of such a thing. How do you write about how it feels to lose a loved one if you've never felt it? I guess the power of a good author is in their ability to put themselves into someone else's life, feel what they feel and transform it into words. Perhaps it's actually harder to write about it if you have experienced it - everyone experiences death and loss differently, but I think that Harrinton's perspective on it is a good one. The whirling mess of emotions that Harper goes through is a believable portrayal of grief, and it's only support of her best friend Laney and the surprising involvement of the irascible Jake that get her through it.

Road trips are usually the domain of the movies (yeah there are a few great road-trip books out there, but so many movies!), but the journey we embark on with Harper, Laney and Jake is an enthralling journey, with a kick-ass soundtrack to boot. Harrinton weaves the music into the story seamlessly, and it's an integral part of the book. Any young readers who haven't heard the tunes mentioned really need to refer to the soundtrack listings at the end, make their own mix-cds (or playlists if they really must), and then read the book again. I promise everything will be better.

Not being American, sometimes I have a problem with US fiction in that I don't get some cultural references, or the language does my head in! Not so with Saving June - Harrinton's descriptions are just right - the heat, the crazy tourist spots, the diners and gas stations, the endless road. We're not overloaded with minute details, but the important ones are there - it's a hard balance to get right but Harrington does it spot on.
I'm always partial to a spot of romance, and Saving June has just that. The growing attraction between Harper and Jake winds through the story, not driving it but always there. It's both a realistic and magical imagining of young love. The awkwardness, the intensity, the veering between hate, love, lust and confusion. Those painful moments when you think something's going to happen and your stomach flips and you can't breathe, and then it doesn't happen and the atmosphere ups another notch until the next time.

Saving June is a funny, poignant and raw read. Join Harper on her journey and remember how to be yourself.
Buy Saving June

by Hannah Harrington from Amazon.