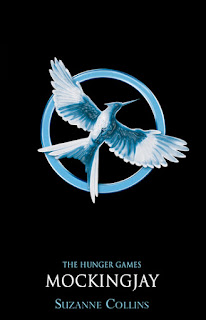 I'm reviewing the final two parts of the Hunger Games trilogy together, as they're so essential to one another that to read one and not the other would be stupid. By the way, I can't review these books without a few Hunger Games spoilers, so don't read on if you've not read the first book yet!

If you look back to my review of The Hunger Games you'll see that I enjoyed it, but felt that it was for the younger end of the YA market, with the gore and suffering taking a back seat and a storyline that's very easy to follow. If you're expecting more of the same from the rest of the trilogy, think again. Catching Fire starts off in a similar vein, exploring the relationships between Katniss, Peeta and Gale, with Katniss and Peeta getting used to life in the Victors Village and embarking on their victory tour. Then, all of a sudden, everything changes gear and it's like reading a completely different book, possibly by a different author.

I've read other reviews and I see that I'm not the only one with this opinion. It has been mentioned that Collins never intended to write a trilogy, which makes complete sense when you look at the three books together. In Catching Fire it was obviously easy for Collins to give us an idea of what life was like for Katniss and Peeta for a while after the games, but then she had to come up with a storyline that could carry on through to the third book. The upshot of this is that it feels a bit disjointed, and while they are both good, the differences between the original storyline and the new one are too great I feel. Maybe I'm being too picky - there's obviously thousands of people out there who have enjoyed the trilogy. I just get the feeling that there was perhaps a few years gap between writing the original book and the last two, and perhaps Collins matured a bit in that time and her writing style changed slightly.

Having engaged fifth gear in the second half of Catching Fire, Collins ramps up the bloodshed, at the same time introducing an increasingly complex storyline. By the time the next Hunger Games are over, we're set up for an explosive third book which in my opinion barely resembles the first at all. We go from the very personal story of Katniss in book one, to a much wider story involving a large cast of characters and the whole of Panem in book three. In some ways it's genius - to take one event in one girl's life and throw it wide open.

Mockingjay is still very much Katniss' story, but her life has changed beyond recognition and she's having to accept some hard truths. It's a harder read, as it's more complex and the whole dystopia theme is much more prevalent. It's also an incredibly sad story. I was crying by the end, and although I salute Collins for creating a satisfactory ending that isn't just 'they all lived happily ever after', I do question her choices of who to kill off. I won't say any more. Get the books, be prepared for something different, and arm yourself with a box of tissues.

Image from ScholasticUK twitter via mockingjay.net.
Posted by bobbie killip at 10:37