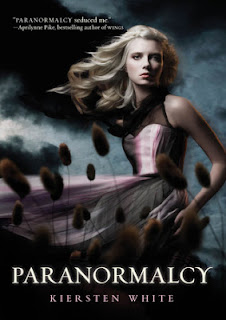 Paranormalcy is on of those books I've heard quite a lot about, but wasn't really sure if I wanted to read it or not. I came across it in a charity shop though and couldn't resist - it promises vampires, werewolves, faeries and shapeshifters - a full rota of paranormal characters. So I picked it up and started to read, and was pleasantly surprised.

Evie is special - she can see through the glamours that paranormals cast, meaning she knows when she's looking at a vampire or faerie rather than a hot guy! She's grown up in a facility that works to track and tag paranormals all over the world - she has an exciting life, working as an agent in the field taking down monsters and protecting humankind. It seems like a great life, but she's lonely and would give anything to go to school, shop and date like a normal kid.

I really liked the way vampires, faeries etc aren't romanticised in Paranormalcy. When Evie sees a vampire, she sees their true age underneath the glamour - "Imagine your grandpa. Now imagine your grandpa minus fifty pounds plus two hundres years." Not sexy. Werewolves deal with their lot by getting sedated once a month rather than by running around having fun on four legs. Evie's best friend is a mermaid, but if you're thinking long blonde hair and bra-made-of-shells, think again.

White is clearly in touch with her inner teenager. Lots of YA heroines are ridiculously mature for their age, but Evie is just like a normal sixteen year-old (apart from the whole working with paranormals part of course). She has her moments of self-absorbed whining and vacuous fashionista-ness, but I didn't find that made her annoying - just more real. White manages to make a really likeable, refreshing character who makes me want to follow her story. Evie is like a modern-day Buffy!

Paranormalcy is a fast-paced book. In just a few pages we're introduced to the main characters, we know what the situation is and the action begins. There's no introduction chapters - we just have to take it all on board as we go along, but White writes in such a way that she makes it easy for us. It's an easy, fun read. There's plenty of action scenes, a few tear-jerkers and a good dose of flirty romance. It's not one of my top reads, but I'm glad I picked it up and will definitely look out for the next installment.