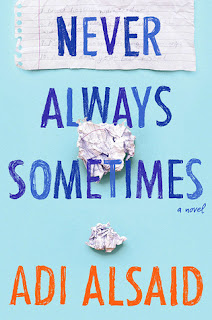 Sometimes rules are meant to be broken
Best friends Dave and Julia were determined to never be cliché high school kids—the ones who sit at the same lunch table every day, dissecting the drama from homeroom and plotting their campaigns for prom king and queen. They even wrote their own Never List of everything they vowed they'd never, ever do in high school.

Some of the rules have been easy to follow, like #5, never die your hair a color of the rainbow, or #7, never hook up with a teacher. But Dave has a secret: he's broken rule #8, never pine silently after someone for the entirety of high school. It's either that or break rule #10, never date your best friend. Dave has loved Julia for as long as he can remember.

Julia is beautiful, wild and impetuous. So when she suggests they do every Never on the list, Dave is happy to play along. He even dyes his hair an unfortunate shade of green. It starts as a joke, but then a funny thing happens: Dave and Julia discover that by skipping the clichés, they've actually been missing out on high school. And maybe even on love.

My review:
Male YA authors are a rare breed, and ones that do romance are even rarer. The few that exist though, are worth reading. Men do romance in a different, less showy way to women. I don't want to lump all male authors in together, but when I look at Adi Alsaid, John Green, David Levithan etc, they do have similarities. A certain feeling, a way with words that doesn't rely on over-dramatic emotions and unlikely detailing (although Never Always Sometimes does feature a girl who smells of honey, which I find improbable yet sweet). Dare I say it, these male authors have a tendency towards realism that I find myself charmed by. They also do really good dialogue. But this isn't a review of male authors in general, this is a review of one particular book.

When two cliche-busting best friends get decide to enact a list of cliches, you're have certain expectations. Alsaid goes against those expectations though. Not all of them - you have to allow a certain amount of cliches through the net. But things start to subtly alter, the story starts to turn in a different direction and you're no longer stuck in the cliche-driven story that you expected. And that's what makes Alsaid so great. He takes a bunch of high school cliches and he twists them into something else.

Dave and Julie are both masterful characters. They shun their high school society, preferring each others company. They have a clique of two, and it's easy to see why when you see how the interact together. But when the Nevers list is put into action, they are required to widen their social circle, and that's when you begin to see differences in their characters. If it wasn't for Julia, Dave would probably be a fairly popular guy. He's likeable and personable, easy to talk to and get along with. But he prefers to spend every minute he can with Julia, and Julia prefers not to mix with other students. Julia is the prickly one. Always with something funny to say, a certain disdain for the rest of the school population, a fixation on her absent mother and a desire to be different. Alsaid has done a top-notch job in developing two wholly real people here. It has to be said, the lesser characters suffer a little. They don't have the same 'reality glow' about them that the two MCs have, but that just makes Dave and Julia glow all the brighter.

I'm not going to go into the whole story - the goodreads summary does enough. Any more and I'll be leaving spoilers lying around, and I don't do that. I do have to mention the ending, but I will endeavour to do so without any important reveals. As you probably know if you read my sporadic blog, I have a thing about endings. I'm very picky and derisive of the standard-style ending. I loved the end of Never Always Sometimes though. It was perfect. The whole cliche-but-not-a-cliche story comes to fruition in a way that is unexpected but completely right.

Never Always Sometimes is a very different creature to Alsaid's hit Let's Get Lost, and I loved it in different ways. The bare bones of Alsaid's style still come through though - his ability to paint a scene so that you become wholly ensconced in it; the way he builds characters up until they become so real you could touch them; the journey that the story provides, and the ways in which it makes you think. I really can't wait to see what comes next.
Posted by bobbie killip at 15:33