Review: I Followed the Rules by Joanna Bolouri 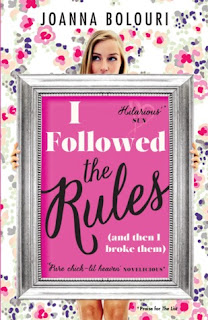 Published by: Quercus
Release date: 2nd July 2015
Series:  n/a
I got it from: Netgalley
Goodreads summary:
Rule 1: Never ask him on a first date. Rule 2: Laugh admiringly at all his jokes. Rule 3: Always leave him wanting more.

Have you heard of The Rules of Engagement? It's a book that promises to teach you to find the man of your dreams in ten easy steps. Unsurprisingly, I don't own a copy. What is it, 1892?

But I'm a journalist, and I've promised to follow it to the letter and write about the results. Nevermind that my friends think I'm insane, I'm stalking men all over town and can't keep my mouth shut at the best of times.

My name is Cat Buchanan. I'm thirty-six years old and live with my daughter in Glasgow. I've been single for six years, but that's about to change. After all, I'm on a deadline.

I Followed the Rules and this is what happened.

My review:
I totally fell in love with Bolouri's debut The List, so I had high expectations for this one. Thankfully, I was not disappointed. Bolouri's distinctive voice shines through loud and clear in this brilliant, sweary rom-com, making it an absolute joy to read. Somehow she's managed to come up with a story that's practically the opposite of The List. Where The List was all about having sex (well not all about that, but there was a lot of it), I Followed the Rules spends a good deal of its time not allowing sex. Despite that though, it still manages to be sexy. Bolouri is a literary wizard.

Cat Buchanan is a wonderful, complex character. I have to say, I don't often pick up books where the MC is a mum, because even though I'm of a similar age to our heroine, I have no children, am the least maternal person in the world, and do not enjoy reading about other peoples' children. Cat is that rare thing though - a single mum who still manages to act like a normal adult. We hear enough about young Grace to make it clear that she is a major fixture of Cat's life, but not enough to bore. She's an important character, but she doesn't get a huge amount of page-time, which works out perfectly for me. Cat is, apart from a successful single mum, a writer, and a brilliant woman who I want to be my best friend. In fact, she reminds me very much of my best friend, which must be why I loved her so much.

There something about Bolouri's books that has me constantly smiling while reading. Her voice is so full of humour and realism, that it's like a boozy night in with your best mate. I love the fact that she puts in lots of shouty capital letters. I love the fact that Cat has a voice in her head shouting inappropriate things at awkward times, the same way I do. I love the fact that it's frank and real and downright hilarious. I know I keep saying how funny it is, but I can't help emphasizing that point. I don't think any other author has had me in such a great mood while reading their books as Bolouri. I could read her writing all day, every day. But enough fan-girling. Just go and read it, I promise you won't regret it.
Posted by bobbie killip at 10:21