Review: A Girl Called Malice by Aurelia B Rowl 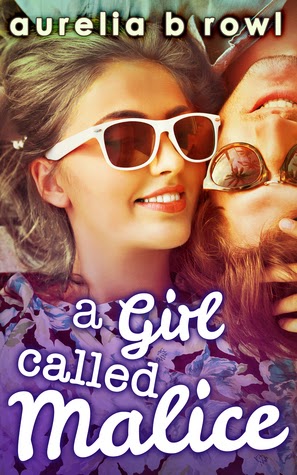 Published by: Carina UK
Release date: 3rd October 2014
Series: Popping the Cherry #2
I got it from: ARC from author
Goodreads summary:
It’s not easy being the Queen Bee. Alice Taylor should know.

You know that girl. The one that the whole school’s social life seems to revolve around. Alice used to be that girl until she decided to quit sixth form college. Suddenly her ‘friends’ aren’t so interested in following her around and her attention-grabbing behaviour is about to get her kicked out of home. With nowhere to go and no one to turn to, her world starts spiralling seriously out of control.

Only new friend Zac Newton seems to believe in her. Lifeguard and poolside hottie, Zac is quite literally her lifesaver. But then, he’s never met ‘Malice’, her mean-girl alter ego, and Alice wants to keep it that way. She knows this is her last chance for a fresh start until her sordid past catches up with her at the worst possible moment.

As everything Alice has worked towards comes crashing down around her, she realises that the hardest thing of all is being yourself…

My review:
I was looking forward to this book for ages, having read and loved Popping the Cherry, and let's just say I was not disappointed. While Popping the Cherry was brilliant Young Adult fodder, A Girl Called Malice takes us more into the realms of New Adult. Alice, 17 when the book starts, is a little young for your typical NA heroine, but in many ways she's older than her years - definitely when it comes to sexual experience. Rowl is not afraid to let her characters get down and dirty, so Malice isn't a book for the younger YA generation. As an older reader though, I'm more than happy with that. I found Alice and Rowl's approach to sex refreshingly honest. But it's not all about lust...

When I first found out Rowl was writing Malice's story, I wasn't sure about it - if you've read PtC and you know about Malice, you'll understand my reticence. But it's true that people act in certain ways for reasons of their own, and Malice certainly has her reasons. It is testament to Rowl's writing that I loved this book even though I didn't identify with Alice at all. I have nothing in common with this girl, and a lesser writer could have had me running for the hills with references to Michael Buble and Hannah Montana, but Rowl told Alice's story so well that I was completely enthralled and had to keep reading. One thing that I think Rowl must have had a hard time with was the timeline - the book covers over a year, which is a long time, and it skips between taking it a day at a time, and weeks at a time. Rowl manages to make it work, but there were just a couple of bits that made me question how long things were taking. That's life though - everything doesn't happen all at once for the convenience of the plot.

The romance that was so sweet in Popping the Cherry is definitely present in Malice too, although it takes a while to make itself known. Just like with PtC, there are a few sappy moments, but what girl doesn't love a bit of stomach-clenching, heart-felt romance now and then? I've just realised that my review is a bit vague, which I apologise for. Once you read the book you'll understand - there's a lot of stuff going on that I don't want to give away. Just know that Rowl's writing is brilliant, her characters are very well-developed, there are moments that will make you sigh wistfully, lots of bits that will make you laugh, and twists to keep you on your toes. If you haven't read Popping the Cherry, go away and do it now. If you have, and you liked it, then order A Girl Called Malice immediately!
Posted by bobbie killip at 13:14