Review: Because of Her by KE Payne 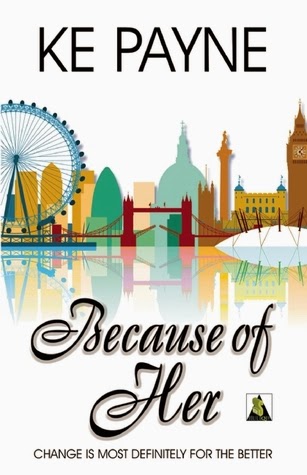 Published by: Bold Strokes
Release date: 18th March 2014
Series: n/a
I got it from: NetGalley
Goodreads summary: For seventeen-year-old Tabitha "Tabby" Morton, life sucks. Big time. Forced to move to London thanks to her father’s new job, she has to leave her friends, school, and, most importantly, her girlfriend Amy, far behind. To make matters worse, Tabby’s parents enroll her in the exclusive Queen Victoria Independent School for Girls, hoping that it will finally make a lady of her.

But Tabby has other ideas.

Loathing her new school, Tabby fights against everything and everyone, causing relations with her parents to hit rock bottom. But when the beautiful and beguiling Eden Palmer walks into her classroom one day and catches her eye, Tabby begins to wonder if life there might not be so bad after all.

When Amy drops a bombshell about their relationship following a disastrous visit, Tabby starts to see the need for new direction in her life. Fighting her own personal battles, Eden brings the possibility of change for them both. Gradually, Tabby starts to turn her life around—and it’s all because of her.

My review:
For some reason, there aren't many gay girls in YA fiction. There are a lot of gay boy best friends, which annoys me a little, but gay girls are rare. So it was a real delight to find Because of Her. It's such a typical contemporary YA romance, but with girls - it's exactly what the genre needs. There must be a lot of girls out there who are either questioning their sexuality, unsure of how to deal with it, or just want to find someone else who feels the same. This book is perfect for all of them, and I think confident straight girls would enjoy it too. It's the perfect book to show straight girls that gay girls have all the same feelings as them, just for different people.

Payne creates a host of well-developed, realistic characters to play with. I thought they were all brilliant, from the parents to the best friends to the bitchy girls, and of course Tabby herself.

The book deals with a lot of different issues - the trauma of moving away from everyone and everything you know, starting again at a new school in a new city, long distance relationships, a guilty crush, and then there's the whole homophobia and coming out to friends and family thing. It's a lot to pack into one book, but Payne does it well. It doesn't feel rushed or over-done at any point. The pacing is good, and everything is given due consideration.

I found Because of Her a very sweet story. The way Tabby describes how she feels about Eden, first as a crush and then something more, is very well written and gave me that squiggly feeling inside. I felt Tabby's hurt when things were going against her, and I felt her anguish over how things went with her girlfriend Amy. Reading Tabby's story really took me back to that time in my life, not because I went through the same things, but just because Payne really captures the way a girl that age feels and processes things.

Immensely enjoyable read, I will definitely be looking up Payne's other books.
Posted by bobbie killip at 10:14

Email ThisBlogThis!Share to TwitterShare to FacebookShare to Pinterest
Labels: because of her, contemporary, LGBT, Payne, romance, Tabby, UKYA, YA, Young-adult fiction