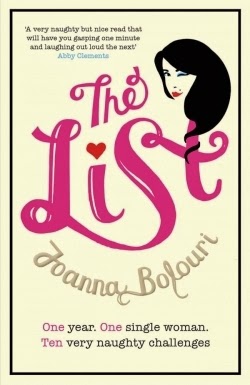 Published by: Quercus
Release date: 10th April 2014 (first published 5th Dec 2013)
Series: n/a
I got it from: NetGalley
Goodreads summary: Phoebe Henderson may be single but she sure doesn't feel fabulous. It's been a year since she found her boyfriend Alex in bed with another woman, and multiple cases of wine and extensive relationship analysis with best friend Lucy have done nothing to help. Faced with a new year but no new love, Phoebe concocts a different kind of resolution.

The List: ten things she's always wanted to do in bed but has never had the chance (or the courage!) to try. A bucket list for between the sheets. One year of pleasure, no strings attached. Simple, right?

Factor in meddlesome colleagues, friends with benefits, getting frisky al fresco and maybe, possibly, true love and Phoebe's got her work cut out for her.

My review:
Oh my giddy aunt, I bloody LOVE Phoebe! I want her to be my best friend. The List was a serious test of my willpower - I wanted to devour it in one sitting, but I also couldn't bear for it to end so I had to ration myself and only read a bit at a time.

It's chick-lit, but the really good type. It's not all namby-pamby romance and twee middle-class shenanigans. It's hilariously irreverent, bravely bolshy, brilliantly lewd and has one of the highest feel-good factors I've ever read. Seriously, this book put me in such a good mood. Improved my sex life too! Oh yes. The List has the best approach to sex. It approaches it as an adult, but one who's not a mire of hang-ups. It says 'Let's be grown up about this. Sex feels good, and if you step a little out of your comfort zone you'll probably find it can feel even better!' It's not erotica - there's too much comedy for that. It's raunchy and fun though.

I've decided I like books that are split up into a number of things. 16 Things I Thought Were True was another recent good read, and 13 Little Blue Envelopes was another. It's not that I need an easy paint-by-numbers story, it's just that there's just something fun about progressing through the list. Maybe I'm a list geek. Also, it's set in Glasgow, but not in a gritty, Trainspotting type way. More a modern-but-down-to-earth city sort of thing. And don't worry, it's not written in a phonetically Scottish way or full of unpronouncable slang, either. It's just Scottish in an excellent sense of humour, ballsy and outgoing way.

Now up until this point I was only about two thirds of the way through the book. I was just so excited about it that I had to write about it. I have to admit that after that point it did go a bit more standard chick-lit, but it was still really good. I just had to read faster because I couldn't leave it alone when things weren't going exactly as I wanted. Of course if it was all plain-sailing it wouldn't really by much of a story, so that is in no way a criticism. Actually, I've been reading a lot of New Adult and Young Adult angst lately, and it was so refreshing to read about people who aren't recovering from some horrific loss, abuse or sudden discovery of magical powers.

What's actually astounding is that it appears to be a debut novel. I went onto Goodreads to look up and obtain everything else Bolouri has ever written, because I'm obsessed with her, and it turns out there is nothing else. Get writing, woman! I need more of your books!
Posted by bobbie killip at 10:32