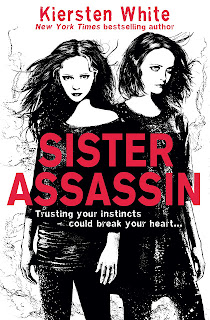 NB this book is titled Mind Games outside the UK.

Time for something completely different. Sister Assassin is unlike any YA book I've read. It has a hint of the supernatural, in that it features girls with abilities such as mind-reading, seeing the future and feeling emotions (known in the book as readers, seers and feelers), however it's not all about that. It's also about  relationships, abuse, control and escape.

Sister Assassin is a hard book to review without dropping any spoilers. Glancing at other reviews, it seems to be a bit of a marmite book - people either love it or they hate it. Personally, I loved it. It's so different from the usual paranormal romance that has flooded the YA market, it was like a breath of fresh air. Or perhaps I should say a breath of tainted air, because this book is quite gritty, although it's easy to just get caught up in the thrill and excitement, and gloss over the subtext.

Told using a dual PoV, Sister Assassin is the story of two sisters. Annie is blind, but she has visions - she can see the future. Annie's younger sister Fia doesn't think she's special - it's just her job to look after her disabled big sister. But when Annie is offered a place at the Keane School for Exceptional Girls, Fia discovers that Annie isn't the only one with a special gift. Fia just knows that agreeing to join the school is the wrong thing to do - she doesn't know why, but her intuition tells her it's wrong, and her intuition is flawless. However, Annie is overjoyed at the chance to attend a school that offers her a chance at a good future, and possibly even a cure for her blindness, so Fia can't say no. Together, the girls start their new life, but it doesn't take long before Fia works out that what they're being taught isn't exactly on the National Curriculum. Annie has it easy, with a best friend and a tutor who understands her strange visions, meanwhile Fia is being trained to be an assassin, and for the first time in her life she has to keep things from her sister, to protect her from knowledge that would surely break her, just as it's broken Fia herself.

Not only using two PoVs, Sister Assassin skips between time-frames. Beginning with a strange but exciting series of events, each chapter reveals more, with snippets from the past filling you in until gradually everything is explained. This is something that a lot of people seem to have a problem with. I don't. I found the style of writing fascinating, with clues as to what's going on being dropped here and there, scenes from the past adding both interest and essential information. It's like getting to know someone in real life - you start off in the present, with your first impression of a person coloured by the circumstances in which you meet them. Then over time they tell you stories from their past, and you get to know them bit by bit.

Full of angst, terror, a hint of romance and a ton of kick-ass moves, Annia and Fia's story is a dark, thrilling, action-packed rollercoaster ride that you'll find hard to put down.

Published by HarperCollins on 19/02/2013. This review is thanks to an ARC from NetGalley.