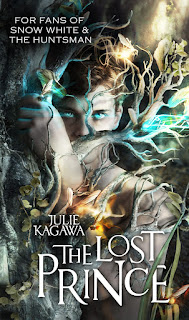 I just can't get enough of Kagawa's world. If you loved the story of Meghan and Ash, the half-human daughter of Oberon and the winter prince son of Mab, then The Lost Prince will surely hold you transfixed as I was. Meghan's story, told in the first three books of the Iron Fey story, blew me away. Ash's part came next with the Iron Knight, and I fell in love even more - both with the gorgeous ice prince and with Kagawa's writing. I thought the story ended there, but then came The Lost Prince - Ethan's tale.

Kagawa has an innate feel for what her readers want. Meghan's adventures were a rollercoaster ride of dark thrills, romance and danger. Ash turned from the bad-boy we all fell for, into a swoon-worthy hero with a story of his own. Then, when it seemed like the world of the Iron Fey would have to live on in our imagination alone, Kagawa comes back with a doozy! Rather than attempting to continue with the lives of Meghan and Ash directly, Kagawa has drawn Meghan's little brother Ethan into the Nevernever.

If you're reading this review, I hope you've already read the first four books of the Iron Fey series. If not, go away and read them now! I'm doing my best not to reveal any spoilers, but it's hard to talk about this book without mention of what's gone on before. So I'm going to assume that anyone reading on knows the series, and knows Kagawa's spell-binding talent. I could wax lyrical for an age about her amazing writing, about how she brings her world to life with an ease that makes me incredibly jealous as a writer. I could spend a good few paragraphs praising her incredibly well-formed characters, realistic and engaging dialogue, and perfectly detailed descriptions. But let's leave it at that. You all know she's awesome!

We met Ethan Chase a long time ago - the four year-old little boy who could see faeries was the reason Meghan was dragged into the world of the fey in the first place. Now he's grown up, but he's damaged. Being able to see the Fair Folk, being constantly tormented by them, has turned his into a bitter, wary and harsh character. He can't let anyone near him for fear that the fey who make his life hell will transfer their attention to anyone he becomes close to. When Kenzie St James forces herself into his life though, he doesn't have any choice.

Ethan just wants to live a normal life, away from faeries of any type. Unfortunately, that's not an option. They know he can see them, and they won't leave him alone. Pesky piskies and mischievous gremlins are one thing, but when scary, ghost-like fey attack him in public and his half-phouka friend goes missing, Ethan, along with Kenzie, is forced to enter the Nevernever and seek Meghan's help.

Enter Grimalkin! You may have thought you'd seen the last of the sarcastic cait sith, but no, Kagawa has given us a gift of more dry wit and timely appearances from our favourite cat. He's not the only old friend to have a place in this tale either. Brief appearances from Meghan and Ash assure us that their story had the right ending, and the introduction of a character called Keirran will certainly mean something to those of you who have read the Iron Knight. Leanansidhe has her place in the proceedings, but it's Robin Goodfellow's guest appearance that will make the most people happy I feel. Good old Puck jumps in to save the day once or twice, and although his part isn't a big one, it's good to see that he's still around.

I don't want to give too much away so I won't mention any more. Suffice to say that there is a good dose of adventure, just the right amount of romance, some kick-ass moves, and I am now on tenterhooks waiting for the release of The Traitor Son (expected Sept 2013)!

See my review of The Iron King, first in the Iron Fey series. One day I'll get around to writing reviews of the other books too!
Posted by bobbie killip at 11:46