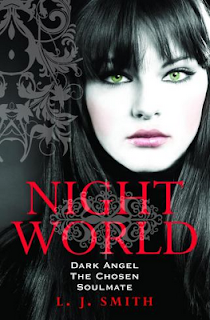 There's something rather charming about the world that L J Smith has created for her Night World series. Obviously a lot of thought has gone into the features and rules of the Night World, and the more I read of it, the more I get to like it. I've had Volume 1 for a while now and enjoy re-reading it every now and then. The stories are fun, easy reads, and although some characters turn up in other books the tales themselves all stand alone. It's nice sometimes to read just one book, rather than committing to a series or trilogy. With the Night World you can do just that - pick a story that suits your mood, and enjoy!

Volume 2 has its roots in the soulmate principle and Circle Daybreak - the group of humans and Night Worlders who want to live in harmony rather than killing one another. I confess I love the soulmate principle - "It says that every person has one soulmate out there, just one. And that person is perfect for you and is your destiny." - quote from the vampire James in Night World Vol 1. I also love that L J Smith doesn't make it easy for her characters who have found their soulmates. When a Night Worlder and a human get together, nothing is going to be easy.

Book 1 in the volume, Dark Angel, is interesting as it doesn't focus on the usual Night World character set of vampires, witches and werewolves - at least not at first. Instead we are treated to a mysterious angelic being, although it quickly becomes clear that if he is an angel, he's certainly not a good one. L J's themes are often standard teen fare - doing bad things to become popular at school isn't a new story by any stretch, but the way she presents it is fresh and interesting, and the characters are well-written. The heroine, Gillian, has some weakness at first, but she grows and finds her strength as the book goes on, becoming more and more likeable.

Book 2, The Chosen, is a real action adventure story. Rashel is like the opposite of Gillian in Dark Angel - Rashel is an incredibly strong character, relying on herself any no-one else. When she finds her soulmate she doesn't want to admit it, let alone accept it. It doesn't help that Rashel is a ruthless vampire hunter and her soulmate is Quinn, one of the most bad-ass vampires around. It makes for an explosive cocktail, and an enjoyable read.

Book 3, Soulmate is the very essence of that soulmate principle I love so much. With a relationship between a human and a supernatural being that spans the ages, it has strong shades of Lauren Kate's Fallen series, but I forgive it - it's presented in a different way, and L J's writing is so different from Kate's that although the basic theme is the same, you can't really compare the books.

Three very different stories, three great reads. I really admire the way L J finishes her tales. I think a good ending is one of the hardest things to write, but L J gets the balance just right - each story has its own end, but you know it's not really the end. It's not as if a sequel is required, but when you catch a glimpse of those characters later in another book it makes you really happy to see how their lives are going. Like real life, each episode comes to an end, but life goes on. Volume 2 has cemented by love for the Night World, and I'll be looking out for Volume 3.

on Amazon. It's not strictly necessary, but I'd advise reading Volume 1 before starting on Volume 2 - Buy Night World: Bind-up v. 1, Bks. 1-3