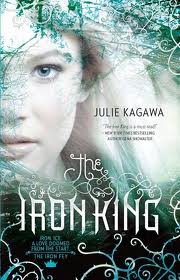 If you've been reading my reviews you'll know that I'm a bit sceptical when it comes to good faery fiction. I resisted reading Kagawa's Iron Fey books for ages, thinking they would be more of the usual airy-fairy fey with the same old stories. I came across a review that stated parallels with the old film Labyrinth though, and I was intrigued. I love that film, always have, and any book that has been inspired by it can't be all bad. So I ordered a copy of the first book of the series, The Iron King, from my local library. Here's a hint by the way - you can reserve kids and YA books online for free and collect them from your local library, it's a great way to try out new authors!

I have to admit it, I was totally drawn in from the start. Yep, the parallels with Labyrinth are there, but it's really not a bad thing. The little brother being stolen by faeries, a friendly troll, an evil faery king... it's all there to see, but it's not like Kagawa is copying the brilliant old Bowie film, it's more like a nod of respect to it. These are but small parts in the rich tapestry that Kagawa weaves, full of wonderful details and inventive characters.

All the pageantry of the Seelie and Unseelie courts are there to be enjoyed and feared. Ancient characters such as Oberon, Titania and Puck take their parts and play them perfectly, creating a supporting cast for our original heroine Meghan Chase. The introduction of the Iron Fey is the perfect foil for all the traditional faery references. Kagawa has created an enchanting world, where the industrial age has fuelled the glamour and dreams of the fey in a new way, creating a new court, one that is deadly to the ancient characters that have come to optimise the world of faery.

I love the level of detail Kagawa uses. She guides us through the dark world of the Nevernever with consummate ease, showing us everything we need to see without getting bogged down in the glory or a piskie's wings or some such nonsense. Meghan comes into her heritage slowly but surely, and as we follow her quest, we are reined in ever tighter, until we feel we are in another world ourselves, one where we can't stop turning the pages for fear of losing something ephemeral and special.

I'll be adding The Iron King to my wish-list for sure, along with the rest of the series. Look out for my review of the next intallment - The Iron Daughter - soon.