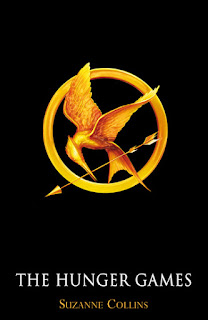 Okay, so I'm probably the last person to read The Hunger Games, rendering this review pretty useless, but to be honest it didn't really appeal to me at first. I don't like buying into the hype, so when something's huge in the media I tend to avoid it rather than rushing in to see what all the fuss is about. However, I've decided to do this review blog so I thought I'd better check it out. Also, I came across the first book of the trilogy in a charity shop so that decided it for me.

Is it worth the hype? In so much as anything is, yes. It's interesting to watch media trends and wonder just how many people realise what a huge effect the media have on our lives and our taste. Twilight was huge for a while, so we had that whole vampire resurgence, but you only have to go back a few years to see that it was just a repeat of the Anne Rice media train, and Bram Stoker before that. Eventually the market gets over-saturated with vampires, werewolves and the like, so they have to find a new angle, something different that will appeal to the masses. Bring on The Hunger Games - a futuristic dystopia where teenagers fight to the death in an arena. It's like a tailor-made antidote to the intense romance of Twilight - or is it?

I was surprised to come across a strong romantic storyline - I should have known that a trilogy this successful would hang on a love story, but I didn't expect it to be such a large part of the book. I was rather expecting more gore and suffering to be honest. It's certainly not the first time we've been drawn in by the grimy realism of a future where there isn't enough food to go around, where kids will fight over a loaf of bread and think nothing of killing each other. I couldn't help but think of the Japanese film Battle Royale (based on the book of the same name) as I read The Hunger Games, but I guess as in the art world there are no new ideas, only new interpretations of a theme. Whether it's because of being aimed at a slightly younger audience, or just the whim of Suzanne Collins, the gore is kept to a minimum and the general suffering takes a backseat to our heroine Katniss Everdeen's personal experience. This is no bad thing though - if I wanted to read about gruesome murders and a disgusting account of living in the wild I wouldn't have gone to the YA fiction section.

I found the book very easy to read - it's probably aimed at age fourteen or so, and the writing style is of the first person/present tense type that makes it very addictive. With a plot that shoots along consistently at a hundred miles per hour, it's impossible not to get sucked into Katniss' world. It's a world that's hard to live in, tatty around the edges but with a few fluffy moments still. It's a very good interpretation of a sixteen year-old girl and how she thinks as she goes through this extraordinary experience. Okay, so it glosses over a lot of filth and has the odd improbable moment, but that's what artistic licence is for right? It's also another facet of Katniss' character - this strong young woman isn't one to let the bad things get her down, she just won't think about them and they won't seem as bad.

I was pleasantly surprised to see that the Games were over by the end of the book - I knew it was part of a trilogy and was worried for a while that I might have to buy the other two to finish the story. Collins has done well though - The Hunger Games stands alone well as a story in its own right, while at the same time leaving things nicely open should you wish to continue reading about Katniss. You know what? I think I just might - bring on Catching Fire!

Already read it? Check out my review of Catching Fire and Mockingjay.