Review: The Dark Side of Midnight (Spy Girl Series) by Carol Hedges 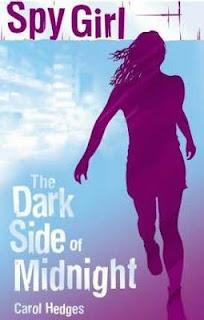 I don't normally go for books in the children's section of the library - Young Adult is much more my cup of tea - but The Dark Side of Midnight caught my eye on a display, and after reading the bumf at the back I thought it looked like a fun read so I gave it a go.

I've read my fair share of children's/crossover books - the Harry Potter series and Pullman's His Dark Materials trilogy being the most obvious, so I was hoping for something of a similar caliber. I guess I got my hopes up too much, though. Don't get me wrong - Spy Girl could be a great series, but I think it has some maturing to do. It's like the pilot episode of a new TV series which then gets polished and turned into something better if it does well enough.

It was the premise that intrigued me - Jazmin is a schoolgirl dreaming of being a spy like her mum, and by a fluke chain of events she actually gets her wish. It sounded fun, a light read and a great piece of escapism. It was soon clear that the story is set somewhere in the not-too-distant future, presumably to enable a host of futuristic tech to be used. Fair enough, I can handle futuristic. There are elements of this future that weren't really explained though, and I think if they had been it would have made for a more enjoyable read. It's a problem you see quite often - the author has a whole world in their head when they're writing, and they know exactly what and where everything is, but they sometimes forget that the reader isn't privy to their thoughts.  It always surprises me that their editors let them get away with it, but there you go.

An element of romance was to be expected in a book for young girls, but I was surprised that the boy in question appeared to be a few years older than 14 year-old Jazmin. I'm not a parent, and maybe I'm being stuffy but I think at that age girls should be encouraged to look to boys their own age for boyfriend material. Overlooking the slightly inapropriate love interest, I ploughed on, enjoying Jazmin's plucky character and her defient attitude when it comes to her perfect, popular cousin. Then everything started to go a bit weird and supernatural. I don't want to drop any spoilers so I'm not going to give away too much. I just had the feeling by the end of the book that it's having trouble working out quite what it is. Spy thriller vs futuristic vs romantic coming-of-age story vs supernatural fiction. I'm afraid it was all a bit too much - the supernatural element on top of everything else felt a bit unnecessary, as if it was being jammed in just because it's so popular at the moment. If Hedges had stuck with a futuristic spy thriller with an element of romance I can't help but feel it would have worked better.

I would read another Spy Girl book just to see how the series progresses, but I wouldn't buy it.