Review: Tonight the Streets are Ours by Leila Sales 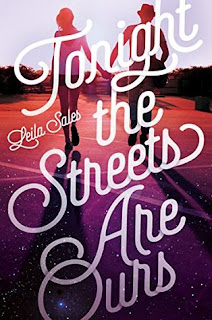 Published by: Macmillan Children's Books
Release date: 24th September 2015
Series:  n/a
I got it from: Netgalley
Goodreads summary:
From the author of This Song Will Save Your Life comes a funny and relatable book about the hazards of falling for a person you haven't met yet.

Seventeen-year-old Arden Huntley is recklessly loyal. Taking care of her loved ones is what gives Arden purpose in her life and makes her feel like she matters. But she's tired of being loyal to people who don't appreciate her—including her needy best friend and her absent mom.

Arden finds comfort in a blog she stumbles upon called "Tonight the Streets Are Ours," the musings of a young New York City writer named Peter. When Peter is dumped by the girlfriend he blogs about, Arden decides to take a road trip to see him.

My Review:
I was a huge fan of This Song Will Save your Life, so I was inordinately excited to have a chance to read Tonight the Streets are Ours. I tried not to expect to much from it, after all no two books are the same and although I generally enjoy works by the same author who penned one of my favourite books, this is not always the case (see my review of Maggie Stiefvater's Scorpio Races for an example of this). I have to say, TTSAO didn't leave me with the same feeling of euphoria that TSWSYL did, but it did leave me with a smile on my face.

TTSAO is the kind of book that you can't appreciate fully until you reach the end. The journey is a good one; it's interesting and somewhat whimsical yet full of feeling. But the ending is what made me smile. I would have to say, trite though it is, that this is a story of self-discovery. Which is an important and worthy thing, particularly at the age of 17. TTSAO was a reminder, for me, that you don't always have to be the person that other people and circumstances have made you into. Sometimes you have to carve your own way, and sometimes you have to let other people do the same. It's not always easy, but it tends to be worth it.

I can't tell you much about the story that's not already in the blurb above, without getting spoilerish. I can tell you that Sales' writing is just as delightful and insightful as it was in This Song. I can tell you that although written in the third person, her characters are particularly alive, knowable and full of the little things that make us human. They're not all nice, or even especially likeable, at least not all the time, except for Arden. I found myself liking that girl more and more as the book went on. And seeing as I already liked her from the start, I guess by the end I was half in love with her. The thing about the characters in general, is that they're not the same people at the end as they are at the start. As Arden discovers this, so do we. I can also tell you that while not as happy-making as This Song, TTSAO was thought-provoking, smile-provoking and insurance that I will read whatever Sales throws at me next.
Posted by bobbie killip at 14:32

Email ThisBlogThis!Share to TwitterShare to FacebookShare to Pinterest
Labels: contemporary, leila sales, self-discovery, this song will save your life, YA, Young-adult fiction