Blog Tour: The Summer After You and Me by Jennifer Salvato Doktorski 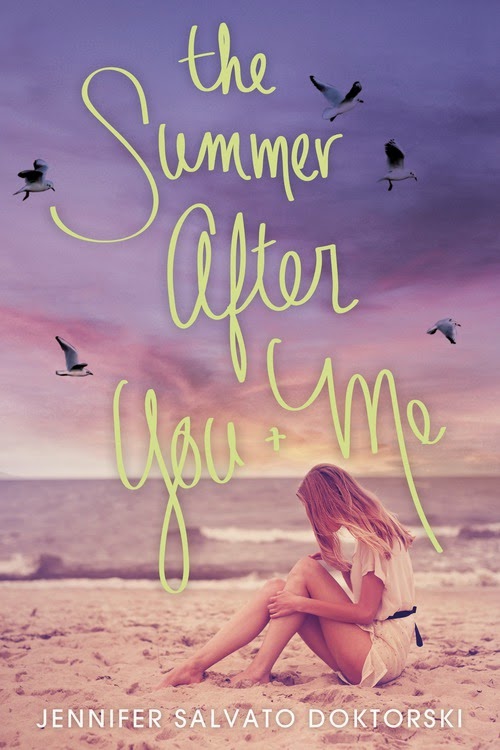 Welcome to our stop on the The Summer After You and Me tour for Jennifer Salvato Doktorski. This tour is hosted by Sourcebooks Fire.

Published by: Sourcebooks Fire
Release date: 5th May 2015
I got it from: Netgalley

Will it be a summer of fresh starts or second chances?

For Lucy, the Jersey Shore isn’t just the perfect summer escape, it’s home. As a local girl, she knows not to get attached to the tourists. They breeze in during Memorial Day weekend, crowding her costal town and stealing moonlit kisses, only to pack up their beach umbrellas and empty promises on Labor Day. Still, she can’t help but crush on charming Connor Malloy. His family spends every summer next door, and she longs for their friendship to turn into something deeper.

Then Superstorm Sandy sweeps up the coast, bringing Lucy and Connor together for a few intense hours. Except nothing is the same in the wake of the storm, and Lucy is left to pick up the pieces of her broken heart and her broken home. Time may heal all wounds, but with Memorial Day approaching and Connor returning, Lucy’s summer is sure to be filled with fireworks.
--------------------

Jennifer Salvato Doktorski is the author of two YA  novels and is a freelance nonfiction writer. Her first paid writing gig was at The North Jersey Herald & News, where she wrote obituaries and began her lifelong love of news and coffee. She lives in New Jersey with her family.

Ahh... there's just something about a really good YA contemporary read, especially if it features a beach town, summer, and a quirky MC. TSAYaM has all of those, plus a whole lot more. Now I'm not usually one for making comparisons, but I have to mention that this did have a bit of a feel of Sarah Dessen to it, which I loved about it - she's one of my favourite authors. TSAYaM has similar themes of new and old loves, new and old friends, getting off track and finding your way back again. Plus the whole beach town thing. There are a lot of summer romances out there, but just a few that are special enough to rise to the top of the pile, and this is definitely one of them.

Lucy is a wonderful character. She's intelligent, a bit of a geek, slightly socially awkward, but in possession of good morals. Her mother says of her: 'One of the things I admire most about you, honey, is that you're as responsible as you are fearless. It's a rare combination.'. And it's true. Aside from the social awkwardness, Lucy is the kind of person who knows what she wants and sets out to get it. She's good at school, she knows what she wants to major in at college, she has plans for interning through the summer, she has her boyfriend and her friends and her job - everything seems perfect. Or is it? Of course it isn't. Life doesn't work like that.

What I loved about TSAYaM is that we get to see Lucy's whole life. So many books focus on just one romance, maybe with a bit of friend or family action thrown in. But with Lucy, we're involved with her friends, her boyfriend, her family, her job, her interests - it's all there and it makes it all so much more real. And when Lucy loses her way somewhat in her perfectly planned life (or, in some cases, the way is dragged out from under her feet), that means we get to see all the knock-on effects. Doktorski has created a full and complex life for Lucy, but she's also done a top job with the other characters - each and every one of them, from Lucy's twin brother Liam, to her boss at work, feels wonderfully real.

I have to mention Sandy too - not another character, but the superstorm. TSAYaM is set a few month after Sandy tore up the coast, and it was really interesting to read how it Lucy and her family and friends. Lucy and her family were lucky - they had to stay with her grandmother for a while, while their house was repaired, but they didn't lose everything the way some people did. It still affected them in a big way though. The way Lucy hates the smell of newness - the new flooring, furniture and decor in her house; the newly patched and painted walls at her work - really gives feeling to the devastation that Sandy left behind. Everything is a bit different and unfamiliar, and home doesn't quite feel the same anymore. Lucy doesn't feel the same either - she's going through the motions in her relationship with Andrew, which has turned from best friend to 'more', but she can't stop thinking about Connor, the summer boy next door who she shared a moment with on the day of the storm, only to be ignored by him in the following months. Now it's nearly summer again and Connor is back, and she doesn't know how to react.

Although the romance is not the whole story in this book, it does play a big part. I'm not going to say too much more about it, as I don't want to give anything away. I will just say that I think Doktorski has written this aspect of the book just as brilliantly as she has all aspects. It feels realistic, age-appropriate, and it went the way I wanted it to. All in all, I really enjoyed this book, for lots of reasons. I got totally drawn into Lucy's world, and I didn't want to leave it. This is my first Doktorski read, but I'll definitely be looking up her other books now.

Here's an excerpt from the book:

Connor opened the gorgeous double doors, each with half-moon stained-glass windows on the top, and motioned me inside. “After you.”
The house had that distinct yet hard-to-describe smell of a beach home that had been closed up for a while. I walked to the center of the high-ceilinged foyer and immediately pic­tured pine garland and twinkling white lights wrapped around the sweeping banister.
“Wow. I’d love to spend Christmas here,” I said and immedi­ately regretted being so sappy.
Connor smiled. “You could fit a twelve-foot tree in this hallway.”
I admit, over the years I’ve had my share of Connor-centric fantasies. However the image of him watching his children pad down the stairs on Christmas morning had never been one of them…until that very second. I liked thinking about Connor that way.
“Come on. You’ve got to see the master bedroom.”
The wholesome image of a Malloy family Christmas van­ished. Aha, I thought. That was the Connor I knew.
“Uh-uh,” I said. “The widow’s walk. I want to go there first.”
“Race you,” he said and took off running.
He beat me up the two flights and was waiting for me in the third-floor hallway toward the back of the house. Off the hallway was an art studio, with a drafting table and a bookcase. There was also a telescope standing near the window.
“Follow me.” He crossed the studio and unlocked the dead­bolt to the narrow door leading outside.
“You’ve already been up there?”
“First thing I did when I got here,” Connor said.
“Not the master bedroom?”
“Nah, that’s the first thing I wanted to do when you got here.”
I thought it was just more flirty banter, but Connor’s flushed cheeks looked as warm as my body felt. He stared at me for a beat too long and my throat constricted. I was suddenly aware that I’d left the house with slept-on hair and no mascara. The look on Connor’s face told me he hadn’t noticed. His eyes never left mine.
Finally he said, “Come on, Luce. I’ll follow you.” The space was tight when I passed in front of him, and the closeness of his body gave me the shivers. I opened the door and stepped outside onto a small patio. I walked toward the wrought-iron spiral staircase that lead to the widow’s walk on the roof and placed my hand on the railing. My knees felt shaky as I began the climb, but I never looked back.

And here's where you can buy it:

And here's what you've been waiting for: the Giveaway!

a Rafflecopter giveaway
Posted by bobbie killip at 08:00