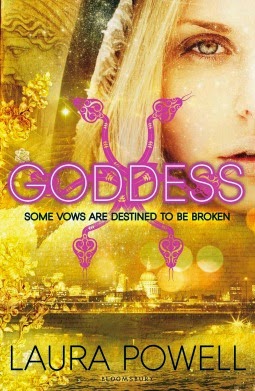 Published by: Bloomsbury Children's
Release date: 10th April 2014
Series: n/a
I got it from: NetGalley
Goodreads summary:
Strikes. Starvation. Riots. Britain is at breaking-point and Aura is blind to it all. The Cult of Artemis is the only home she’s ever known. Enclosed in its luxury lifestyle, the unrest gripping the country seems to belong to a distant world. Her dream is to serve the Goddess and taking a vow of chastity and obedience seems a small price to pay. But days before Aura is due to be initiated as a Priestess, she meets Aiden, the rebellious son of a cult insider, whose radical ideas and unsettling charm force Aura to question everything – and everyone – she knows.

My review:
I have to admit, it took me a couple of chapters to get into this book. The world-building wasn't that great at first, but it was interesting enough for me to keep reading, and it got better as the book went on. When I read the author's note at the end explaining things, it all made a lot more sense, though I'm sure that note is at the end instead of the beginning for a reason, so I probably wouldn't advise reading it first.

The political vs religious intrigue makes for a satisfyingly meaty story. Powell's London is a very different place to our own in some ways, yet very recognisable in others. It's a scarily realistic picture of what could have been. This part dystopia, part alternate reality is probably the hardest aspect of the book to swallow, but if you treat it as a recognisable fantasy world rather than an unrecognisable reality you should get on okay.

Aura is a very well-developed MC. She's vulnerable in her naivety, yet strong in her convictions. Her extremely sheltered upbringing makes her into a girl to be protected and easy to love, but her unshakeable belief in what's right, is what really makes her likeable.

The mythology takes a bit of getting used to, and I suspect a rough knowledge of ancient Greek myth is helpful when reading - I certainly found it so, and I'm not sure what I would have made of it without that knowledge. But Powell brings it together well, meshing ancient myth and religion with modern life to create a truly interesting world.

Romance - I have to mention the romance. It's minimal in a physical sense, but very real on a spiritual level. Artemis is a jealous goddess and requires her priestesses to be pure in thought as well as deed. She does not take kindly to any who even think of defying her. I shan't give away any more than that, except to say that Powell approaches this aspect of the story exceptionally well.
Posted by bobbie killip at 10:33