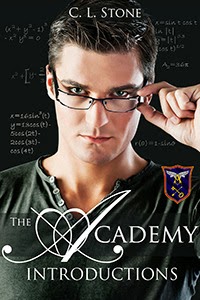 Published by: Arcato Publishing
Release date: 23rd December 2013
Series: The Academy #1
I got it from: NetGalley
Goodreads summary:
With an agoraphobic mother and a barely-there father, Sang abhors the isolation keeping her in the shadows. The only thing Sang craves is a fresh start and to be accepted as ordinary by her peers, because for her being different meant being cast out alone.

When her family moves to a new school district, Sang infiltrates a group of boys nearly perfect in every way. Grateful for an influence outside of her parents’ negativity, she quickly bonds with the boys, hoping to blend in and learn from them what it means to have a natural relationship with friends.

Only the boys have secrets of their own and they’ll do anything to keep her safe from the knowledge of the mysterious Academy that they've sworn allegiance to. Bit by bit, Sang discovers that her friends are far from the normalcy she expected. Will her loyalty change when she's forced to remain in the dark, or will she accept that she's traded one house of secrets for another?

Meet Kota, Victor, Silas, Nathan, Gabriel, Luke and North in a story about differences and loyalty, truth and mystery, friendships and heart-throbbing intimacy.

The Academy, ever vigilant.

My review:
I had a few issues with the beginning of this book - a couple of things didn't quite tie together as well as they should have done, leaving me questioning a couple of pretty major plot features, however I stuck with it and by the end I was glad I did.

Stone's character building is great - we meet seven different guys over the course of the book, which is a lot of characters to get your head around, but she pulls it off well - each guy has his own distinct personality, and the way they all interact with our heroine Sang really works. Stone is cunning in her use of situations to introduce each boy, making him memorable for one reason or another.

Sang herself is a bit of a weak link to start with - her character veers around a bit, one moment shy and naive, the next flirty and fun. But in a way, it makes sense - she's coming out of her shell, shocking herself at times with her own behaviour and learning what it is to be a friend.

Introductions is the title, and it's an apt one - this book is clearly the set-up for an interesting series. We meet all the characters and get a bit of the back-stories that are obviously essential to the series, but nothing major really happens. Despite that though, it's one of those unputdownable books that once I got into, I just had to keep reading! I'm very interested to see what the next book brings us.
Posted by bobbie killip at 10:46