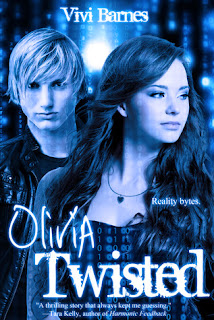 Published by: Entangled: Teen
Release date: 5th November 2013
Series: n/a
I got it from: NetGalley
Goodreads summary:
Tossed from foster home to foster home, Olivia’s seen a lot in her sixteen years. She’s hardened, sure, though mostly just wants to fly under the radar until graduation. But her natural ability with computers catches the eye of Z, a mysterious guy at her new school. Soon, Z has brought Liv into his team of hacker elite—break into a few bank accounts, and voila, he drives a motorcycle. Follow his lead, and Olivia might even be able to escape from her oppressive foster parents. As Olivia and Z grow closer, though, so does the watchful eye of Bill Sykes, Z’s boss. And he’s got bigger plans for Liv…

My review:
What an interesting idea, a modern-day take on the tale of Oliver Twist - with a twist! In fact, with several twists - for one thing, Oliver is now a girl - Olivia, known as Liv to her friends. And then picking pockets is a bit old hat, so Barnes has translated it into a truly modern tale by having her thieves use cyber-crime to make their money.

Now, it's been a hell of a long time since I read Oliver Twist, or even saw any movie versions of it, so I'm not that au fait with the story. However I did get a feeling throughout the book that certain things were cleverly twisted echoes of Dickens' version. Don't worry though - as far as I can remember, it's not like reading a copy of the original tale. Barnes has made this story all her own, with Liv and Z sharing the limelight, trading chapter for chapter in that time-honoured boy/girl point of view that I've come to love.

Liv and Z are both interesting characters. Liv is so good that sometimes it makes you a little bit sick. She's been through the harsh fostering system and has miraculously remained a good girl at heart. Z, not so much. He's a bad boy through and through, even if he is faking being a nerd. At least, that's what he thinks. How long can the bad boy last once Olivia gets her goody-goody claws into him though? Actually, I really liked the spark between these two. Neither of them want to fall for someone, but sometimes it's just not a matter of choice.

With a supporting cast of orphan hackers, evil foster-parents and the big bad boss-guy, Barnes weaves an intriguing tale that will have you reading long into the night.
Posted by bobbie killip at 12:06